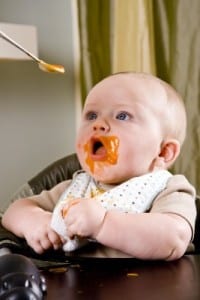 Many parents start their babies on store bought baby food around four to six months of age. They’ve been around for decades and have become a societal “norm” in terms of introducing infants to solid food. According to a recent study, however, we may be depleting their nutritional sources by offering these jarred purees.

Previously, studies have examined the benefits of allowing infants to feed themselves finger foods, rather than offering the pureed infant jars. Researchers found through those studies that children were more likely to foster healthier eating habits later in life. They also found that self-fed children fared better in terms of childhood obesity.

Now, a study conducted by the University of Greenwich School of Science and published in the journal Food Chemistry has found that there are even more drawbacks to offering ready-made infant food. After examining the macronutrient content of eight different baby food samples, researchers found that jarred infant food contained less than one-fifth of the recommended daily recommendation of calcium, magnesium, zinc, iron and other essential minerals.

Some of the missing nutrients varied, depending on the combination the researchers used. As a whole, however, the study determined that all mineral levels fell lower than 20 percent below the recommended daily nutrient supply.

Four varieties of meats and four varieties of vegetables were examined and the jars came from four brands that are sold commercially. The names of those brands, however, were withheld in the study.

Nazanin Zand, the lead author in the study, says that the purpose of her studies – this one and two others under review: one that analyzes the carbohydrate, protein and fats found in store bought baby foods and another on the toxic elements found in baby food– is to raise awareness on holistic nutrition for infants. Such examples could include finger foods when baby is able to safely ingest them or making pureed or mashed foods from home.

“I’m trying to raise awareness and say, ‘Can we please pay attention to this area,’ instead of concentrating so much on breast milk,” said Zand.

While Zand’s statement does not reflect the importance of breastfeeding, parents should keep in mind that the American Academy of Pediatrics and other organizations recommend breastfeeding exclusively for six months. This recommendation also means no pureed foods until after six months. Some physicians, however, are still recommending that infants start solids as early as four months.

Like all things infant nutrition related, parents should weigh their options carefully when deciding which nutritional plan is best for their infant. Questions should be posed to pediatricians and family doctors to ensure that health guidelines are fully adhered to.