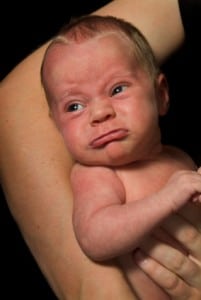 It is a traditional therapy that many parents and doctors have been giving infants for years. Babies who are in pain or about to be given an injection are usually fed sugar water to help them feel at ease. Now, a new study finds that the sugar, doesn’t help soothe the pain.

For the study Dr Rebecca Slater, of University College London divided 59 newborns into two groups. The infants were to be given a heel prick test where a dab of blood is taken from their heels to be tested for life threatening conditions like sickle cell anaemia or cystic fibrosis. This test is usually done in the first few days of an infant’s life.

The researchers gave half of the babies sugar water before the test and the other half were given plain water. It was seen that although the babies who had sugar appeared relaxed, their brains registered as much pain as the other group.

Says Dr. Slater, “Our findings indicate that sucrose is not an effective pain relief drug. This is especially important in view of the increasing evidence that pain may cause short and long-term adverse effects on infant neurodevelopment.”

The findings indicate that although the facial expression of the baby may change after having sugar, he is experiencing the same amount of pain as any other child.

According to the researchers it is therefore important to find better painkillers for infants. There was also a need to rationalise the amount of painful procedures done on young babies as per Dr Judith Meek.

Some believe a warm cuddle from the mother can work better that the sugar water to help baby take the pain. – Atula, Staff Writer