Inference, or “theory of mind,” is the ability to take details from a scenario and applying it with personal knowledge to develop ideas about the outcome. Neurotypical children generally develop this skill around the age of four. Children with autism, who struggle with many facets of social communication, generally develop this skill as well, just at a slower rate than their neurotypical counterparts. A new study, published in the journal Developmental Science suggests that speeding up the process may be as simple as giving the right incentive. 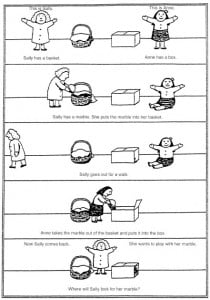 Traditionally, researchers determine how well someone has grasped theory of mind with a test known as the Sally and Ann test. Children are told a story in which two characters (called Sally and Anne) place an object in a basket. After Sally leaves the room, Anne will then move the item from the basket into a box. The theory of mind test takes place when researchers ask the children where Sally will search for the item. If they consistently answer “the basket,” they have grasped the concept of theory of mind. If, however, they consistently answer “the box,” they have not yet grasped inference.

Normally developing children usually struggle with this test at three years of age. Children with autism often continue to struggle with it until the age of three. The recent study showed the same results with the traditional Sally and Anne test.

Using dolls for the test, researchers tested 23 high-functioning children with autism between the ages of 7 and 13. Researchers also tested 73 typically developing children and divided them into three groups, determined by age: 3 years, 4 years and 2 months, and 4 years and 8 months.

Researchers then tried something new; they made the Sally and Anne test more like a game. Dubbed the Dot-Midge test, it starts much like the Sally and Anne test; Midge becomes Sally, who leaves the room, and Dot becomes Anne, who moves the item. The difference, however, is that children have a totally different motivation for guessing correctly in this game.

In the Sally and Anne test, researchers believe that the motivation to choose correctly may be tied to a desire for social interaction. Because children with autism tend to be less concerned with social interaction, they may be less inclined to answer correctly. In the Dot and Midge test, however, children are given a chance to “win” the toy themselves, but they have to let either Dot or Midge look for it first.

To test their theory of mind thinking, researchers allowed the children to choose who got to look for the toy first. If they understand that Midge doesn’t know where the toy was moved to, they are going to choose her to go first so that they can have a chance to find the toy. If, however, they still fail to understand theory of mind, they might still pick Dot to go first.

The researchers suggest that the Dot and Midge test may end up changing the way we look at inference. Not only could it possibly tell us if a child understands theory of mind, just fails to have the right motivation (such as in children with autism), it may also be able to help us determine if a child has grasped the concept sooner than the original Sally and Anne test. Which, in many ways, could be useful in helping to better understand all children, not just those with certain developmental delays like autism.