Home » Study: Toddlers Who Favor Patterns At Higher Risk Of Being Autistic 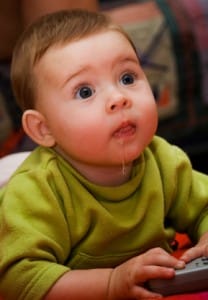 A study from the University of California found that toddlers who favored geometric patterns over social images may be more at risk for Autism (ASD). This preference may be an easy-to-detect signature of toddlers who are on the spectrum.

Karen Pierce, Ph.D., of the University of California in San Diego, studied 110 toddlers from ages 12 to 43 months. Of those toddlers, 37 were diagnosed with autism, 22 had delayed development, and 51 were considered normal. All of the toddlers were shown a short split-screen video that featured moving geometric patterns on one side, and children in high action on the other side. The toddlers’ eye movements when watching the video were recorded.

The researchers found that even young toddlers who had been diagnosed in the autism spectrum seemed to spend more time watching the patterns than the children in the video. The other two groups of children did not have this preference.

The toddlers who spent more than 69 percent of the video watching the geometric patterns had a 100 percent positive prediction for ASD.

“A preference for geometric patterns early in life may be a novel and easily detectable early signature of infants and toddlers at risk for autism,” the authors write.

Both scientific studies and practical experience have shown that the prognosis is greatly improved if a child is diagnosed early and placed into an intense, highly structured educational program by age two or three. And as many parents know, the waiting list to be tested in many cities can be up to a year or more. Anything that would help speed up the process would definitely be welcomed.

The full study was published online Sept. 6 in the Archives of General Psychiatry. – Summer, staff writer