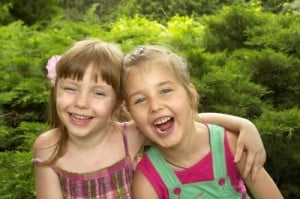 If you could choose the gender of your children, what would be the ideal combination?  Maybe you’d like the millionaire family, one boy and one girl; or the Brady Bunch, three girls and three boys.  Well, a recent survey based study has concluded that having two girls is the recipe for family harmony.

“Rightly or wrongly, many parents have a set idea about the combination of children that would make up their ideal family unit,” said Faye Mingo, spokesperson for bounty.com

“But of course nature doesn’t allow us to choose what we actually end up with or even what personalities our children will have.”

The study, which looked at the survey responses of 2,116 parents, with children under 16-years, found that families with two girls are the most harmonious.  Respondents ranked the two girl combo highly in every category, reporting that they play well together, argue little and can be reasoned with easily.

One boy and one girl was the next easiest combination to raise, with the only downside being a lack of common interests as they grow.

Two boys was the third combo.  Parents of two boys reported that the children tended to get along well and were best friends throughout childhood.  As they grow, however, the boys tend to stop confiding in their parents.

The study found that the larger the family, the more difficult it is for parents to cope.  In families with four children, squabbling is a rampant problem and meal and bed times are problematic.

It is counterintuitive, but the study found that households with four girls had the least happy family life.

Parents with four girls report being less than 100 percent happy in a quarter of instances and one third of the parents of four girls regularly find it difficult to cope.  They’re expensive too; as two thirds of these families reported that they had to purchase larger cars and houses.

“The findings were absolutely fascinating – we often assume little girls behave like angels, and if you have two this certainly seems to be the case.  But the more girls you have the more of a handful they become.

“Going from two to four girls seems to take parents from one extreme to the other – whilst doubling the amount of boys has much less impact.”