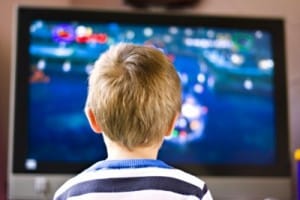 With the statistics of obesity, diabetes and other health problems continuing to rise in children, a great deal of concern has been placed on how food is marketed to children – particularly during child-directed television shows.

Child-directed marketing can be very powerful. Children are easily influenced by what they see on television and are often likely to make food choices according to what they see. And according to a recent study published in the Archives of Pediatrics & Adolescent Medicine, the bulk of the food marketing they are viewing is unhealthy – full of sugar, fat and empty calories.

The study looked at what children between ages 6 and 12 were seeing during television advertisement. According to the result, children in 2009 viewed more fast food commercials than they did just six years earlier – about a third more actually. Still, the news isn’t all bad.

According to the study, a voluntary food industry program called the Children’s Food and Beverage Advertising Initiative, has made some improvement to the types of food seen by children on television. The initiative includes 17 different companies – some of the biggest names like Kraft Foods, General Mills, Coca-Cola and Kellogg – which have all made a pledge to improve the nutritional content of the ads that they feature during child-directed programs.

Their efforts have created a decrease in the amount of sugary, salty and fatty foods seen by children – down from 94 percent to 86 percent. “Overall, fewer of these (unhealthy) products were being advertised, which is good news,” says Lisa M. Powell, study leader and researcher at the University of Illinois at Chicago.

Lee Peeler, spokesperson for the Council of Better Business Bureaus and regulator of the CFBAI stated that the study “shows a lot of progress has been made.” According to Peeler, “they didn’t use the right measure of industry self-regulation.”

The study, according to Peeler, used only the number of ads on television – not the actual content. Fast food chains like McDonald’s and Burger King have made recent changes to make healthier food options available to children Peeler stated.

Joy Dubost, a dietitian with the National Restaurant Association agreed with Peeler and his defense of the fast food chains. “Restaurants continue to innovate and provide more healthful menu options for children and adults alike,” Joy stated in a written statement to reporters.

Still, the issue remains that a lot of unhealthy foods are being marketed to children. I have watched television with my children. While I have seen some improvement in some of the content, I do still see a lot of soda, potato chips, cookies, burgers and more on television, even during child-directed programs. In the end, I believe it really comes down to us, as parents, to decide what our children eat and when.

We cannot blame the advertising or fast food industry completely for the food choices of our children. Parents should be aware, however, that another study recently indicated that, while watching cartoons, children consume 45 percent more snacks when food ads are displayed than when non-food ads are shown. But since there is so much controversy on how to handle the advertising of unhealthy foods to our children, we may be our children’s only hope.

Powell has not mentioned any government intervention to decrease the amount of unhealthy food marketing children see. “Self-regulation moves forward more quickly and is more flexible than government regulation,” she stated.

The American Academy of Pediatrics, however, does not seem to agree with his statement. In June, they requested a ban on all fast food ads aired during child-directed shows. They stated that voluntary guidelines simply weren’t enough.