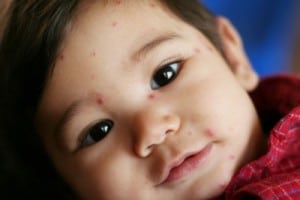 If you have still not vaccinated your child against Varicella or what is commonly known as Chickenpox, it is time to act now as a study suggests that unvaccinated children are 9 time more prone to the illness.

According to the research team at Kaiser Permanente Colorado’s Institute for Health Research who studied the electronic health records of more than 86,000 children aged 12 months to 8 years between 1998 and 2008, those kids whose parents refused to immunize their child against chickenpox were found to be at a greater risk of contracting the illness.

“Many parents question the need for vaccinations. This study provides evidence to counter the misperception among vaccine-refusing parents that their children are not at risk for potentially serious illness,” said the study’s lead author and senior scientist Dr. Jason Glanz.

It is believed that almost everyone contracts chickenpox at least once in their lifetime. It is a highly contagious disease with symptoms like high fever, itchy rash and prominent red blisters developing all over the body. Parents who refuse to get this immunization knowingly or unknowingly also pose severe risk among children who are already suffering from eczema, HIV, cancer or other immune-compromising diseases. It is also dangerous for pregnant women and newborns.

Like all vaccine-preventable diseases, Varicella spread has been controlled drastically since 1995 when the vaccine came to be widely used. The number of cases recorded since the immunization drive has reduced by more than 80 percent.

Although the study could not determine the reason behind parents’ refusal to the vaccine, it is a vital health decision they need to reconsider as when a child is infected, it is not only discomforting for him and the family but also increases the risk of infection of the whole community, according to Dr. Glanz. He stresses ‘Parents should get their child immunized as the benefits outweigh the risk of this safe vaccine.” – Atula, staff writer

The Mayo Clinic says that a common complication of chickenpox is a bacterial infection of the skin. Chickenpox may also lead to pneumonia or, rarely, an inflammation of the brain (encephalitis), both of which can be very serious.

There are many factors that come into play with the vaccine. When asked, Dr.Greene posted this:

In the recent past, the primary benefit of getting chickenpox as a child was the likelihood of attaining lifetime immunity. While 10-20% of people who had had chickenpox would eventually develop shingles (a condition characterized by numbness, itching, or severe pain that lasts for 2-3 weeks), most would not get chickenpox again. This may now be changing in areas where the chickenpox vaccine is common. In the past, multiple re-exposures helped to keep people’s immunity high. Since the vaccine is now standard in the United States, the frequency of the natural disease should decline. Those who have had chickenpox as children will not be re-exposed as often, if at all. Their immunity may wane over time, making shingles and adult chickenpox even more common than they are now.

To date, those who have received the vaccine have a much lower incidence of shingles than those who actually had chickenpox over the same time period. Those who receive the vaccine also have a dramatically decreased risk of scarring. Finally, studies so far have found the chickenpox vaccine to be highly effective in preventing moderate and severe chickenpox in children (Redbook: Report of the Committee on Infectious Diseases, 2000).

The other major benefit of the vaccine is an economic one. The vaccine reduces the costs related to the disease, including the costs of missed work, school, and child-care. This economic factor is a major force in the drive for universal immunization in the United States.

So what do you think?