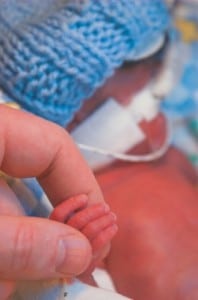 For one reason or another, some women need to deliver earlier than full-term. Researchers have now determined that, as long as the baby is in the vertex position (head down), the success of delivery is not determined by the type of delivery used.

“Selecting a route of deliver at less than 32 weeks gestation is a difficult clinical decision given the high rate of infant mortality and morbidity as well as the maternal risks associated with cesarean delivery,” said lead author of the study, Uma M. Reddy, MD, MPH, from the Eunice Kennedy Shriver National Institute of Child Health and Human Development National Institutes of Health in Bethesda, MD.

Researchers analyzed the data of 2,906 pregnancies and deliveries. All of the women were between 24 0/7 weeks gestation and 31 6/7 weeks gestation, and all of the women had the option of either a vaginal or c-section delivery. The data was pulled from the Consortium on Safe Labor (CSL), which contains information on over 200,000 deliveries that took place between 2002 and 2008.

To determine the success rate of both vaginal and cesarean deliveries, the study authors divided women into gestation groups; women who delivered between 24 0/7 and 27 6/7 weeks were placed in one group and women who delivered between 28 0/8 weeks and 31 6/7 weeks were placed in another. Researchers did this because neonatal mortality seems to occur mostly between 24 0/7 weeks and 27 6/7 weeks.

When looking at the 24 0/7 to 27 6/7 groups, researchers found that 80% of all vertex vaginal deliveries were successful; this was no less successful than c-sections for this group of women. On the other hand, women who attempted a vaginal delivery in which the baby was breech, only 27.6% were considered successful.

For breech deliveries, a cesarean birth proved to decrease the odds of infant mortality. In those that attempted a vaginal delivery, despite the non-vertex position, 6% experienced neonatal mortality. This was compared to only 1.5% of cesarean deliveries in which the baby presented breech.

“The detailed information in our study, not available in birth certificate data, enabled us to account for the effect of attempted route of delivery and indications for delivery on neonatal mortality. This information has direct clinical application and is crucial for counseling families about the benefits and risks of attempting vaginal delivery in this situation,” said Reddy. “For vertex-presenting fetuses less than 32 weeks gestation, we saw no improvement in neonatal mortality with a planned cesarean delivery.”