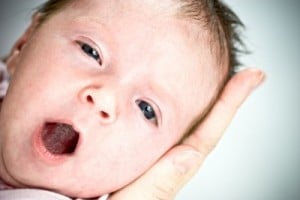 For most adults, when they see another person yawn the first response is to yawn in return. A new study though, has revealed that this reaction is not common in babies. For most children, it may not become a reaction until after age 5.

A two part study looked at infants between 6 and 34 months, as well as toddlers around age 2 years. Among these children, the frequency and timing of yawning was studied to see if the contagious response that a yawn creates was an inborn trait. The researchers found that infants not only do not yawn in response to another yawn they also tend to yawn less frequently than adults.

The average adult yawns around 9 times per day. For young infants, yawning only tends to occur around twice each day. Often only after waking from sleep. For the majority of the infants, yawning did not happen after seeing another person yawn. Of the 22 children shown videos of other infants yawning, only 3 yawned in response.

“The largely negative video results confirm that infants and preschoolers are much less susceptible to psychological influences on yawning when compared with older children and adults,” ABC Science quoted the authors as saying.

Older studies have found that contagious yawning tends to begin around a child’s 5th birthday. By the age of 12, a child is yawning at the same rate as adults yawn. Researchers believe this is because contagious yawning is actually a act of empathy, something that younger infants and toddlers do not have yet. Older children and adults, however, can yawn in response to seeing another person tired.

“Young children may also do less contagious yawning simply because they don’t have the same pressures or social inhibitions as adults: They yawn where they like and when they like,” he says.

Though the study has no practical applications for parents, it is an interesting look into child development and the growth of empathy.- Summer, staff writer