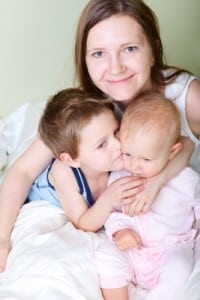 According to a study conducted by the University of Minnesota, parents of young children are generally less fit and healthy than adults with no children. The results of the study, which were published in an online pediatrics journal, indicate that young parents typically do not eat as healthy or exercise as much as non-parents.

Out of the 838 women participating in the study, researchers found that young mothers consumed over 400 calories more than young women without children. Easy to fix meals, like mac’ n’ cheese and chicken nuggets, may be the reason for this. Researchers also found that mothers consume more sugary beverages as well. Interestingly enough, however, the diet of young fathers is not much different than adult males without children.

According to the findings, fathers are less active than childless men of roughly the same age, exercising, on average, five and a half hours each week. On the other hand, childless men get around seven hours of exercise each week.

“I exercised more when I was pregnant than when they were babies. If I work out twice a week, I feel like I’m a hero.”

This study also showed that young mothers also weighed more. Since most of the participants were new mothers, though, this extra weight could simply be left over from pregnancy.

Since getting the proper amount of exercise is imperative for a healthy lifestyle, experts do have some solutions that may help busy parents.

What constitutes physical activity may also need some rethinking. It doesn’t just have to be working the elliptical at the gym. Moms, don’t sit on the bench at the park; kick a ball around with your kids. Choose stairs over elevators. Walk to school.