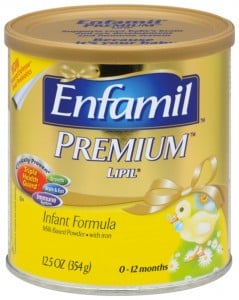 While breast is always best, there are many reasons that a mother may choose infant formula as the primary source of nutrition for her baby. What’s in that formula may astound you and you may be surprised to learn that it could be a contributing factor in childhood obesity – Nancy Brecj was.

Nancy became concerned about the sugar content of infant formula shortly after her granddaughter switched from breast milk to formula. In just one short month, baby Kimberly shot up four whole pounds.

“We looked at all the formulas in the grocery store, even the store brand ones, and none of them listed the sugar grams per serving. None of them,” Nancy said.

Nancy was told by the company that they didn’t use any added sugar in their formula. But with corn syrup listed as the first ingredient on the label, Nancy wasn’t buying it. She wanted some straightforward answers. KPLCtv 7 was willing to help her get those answers.

Independent lab scientists at Deibel Laboratories tested seven of the most popular brands of infant formula. They tested for five different types of sugars and created a sugar profile on each formula brand, based on what they found.

Things seemed to be going good so far, but then scientists found added sugars in two types of Similac formula.

Similac Advance Organic Complete Nutrition measured in at 3.5 grams of the sugar sucralose; one of the sweetest kinds of sugar. Similac Soy Infant Formula with Iron contained four different added sugars, including the super-sweet sucrose and it measured in at 3.8 grams of sugar. Both Similac formulas contained about the equivalent of a tablespoon of sugar per five ounces.

Enfamil and Parent’s Choice, both of which were found to contain only lactose, stated that they do not allow added sugars in their formulas because they are not found in breast milk. Similac, however, did not respond to questions asked about the sugar content of their formulas.

The International Formula Council pointed out that sucrose has been tested and found safe through clinical trials and through years of consumer use. Yet, there is a concern across the world when it comes to sucrose. The concern is so big that sucrose use in formula is banned in dozens of countries across the world, including Europe. What are those concerns? Childhood obesity.

“We’re conditioning them to crave sweetness,” Boyd said. “I would say any formula that has sucrose, it’s super sweet, it makes the kid crave sugar. It triggers the release of dopamine in the brain, and it’s a comfort-level thing. It makes the kid want to eat more, so they become hypersensitive to sweetness.”

He says that some of these formulas are so sweet that they are more like “baby milkshakes.” And while not all of them have high amounts of sugar, those that contain added sugars are having a big impact on the future of children, even if that sugar content is low.

“If a child makes too many fat cells, they never go away. And they always want to be fed,” Boyd stated.

So how does the Food and Drug Administration in America feel about added sugar in formula?