Home » Surprise! Half Marathon Runner’s Back Pain Was Labour 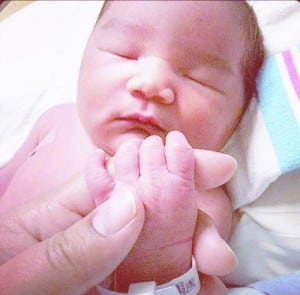 Trish Staine had no idea she was pregnant. In fact, she was training hard for a marathon that she was set to run in a couple weeks. She had just returned home from a two hour run when she was struck with back pain.

“I had a sore back Sunday evening. I had taken a hot shower and was dealing with it,” the new mom told the Duluth News Tribune. “Monday morning, I woke up and had more back pain, and as the day went on it got worse. I thought I should go to the ER. I thought I ruptured a disc or pulled a muscle.”

Continuing on with her day, she watched her husband John play basketball and went for another bath.

When more pain relievers couldn’t ease her discomfort two of the couple’s older children were asked to take her in to the hospital. But the pain was too great and an ambulance was called instead.

During an examination at the hospital her day(and life) was sent in another direction when the tech detected a fetal heart beat.

“Whose baby is that? It’s not possible,” said John, who had a vasectomy.

Trish was immediately taken to the delivery room where she welcomed a baby girl, who weighed 6 pounds, 6 ounces.  The couple has chosen to name her Mira — short for Miracle.

“She didn’t gain any weight,” he added. “Her face was even thinner.”

The new baby will join a full house! The Staines already have two biological children, ages 7 and 11, and two foster children, plus John’s three boys who are 17, 19 and 20.