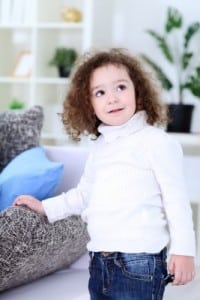 Too much television has been long linked to obesity and lower IQ. But now new research has found that kids don’t need to be directly in front of the set to hamper their development.

A first of its kind research done on the background clamor generated by television every day has found that between the age of eight months and eight years, kids spend an average of 232 minutes a day with the TV droning on in the background. This is apart from the 80 minutes of active television viewing for kids and thus on an average children are being exposed to almost five hours of TV time every day – about the same time they spend in school.

Dr. Victor Strasburger, a pediatrician who has earlier worked on similar studies involving affect of media on children said that the present research is troubling.

It’s quite an alarming study,” he said. “This is a clear warning signal to parents that if they are not watching TV, they ought to turn it off, and a reminder that parents should be avoiding screen time in infants under two.”

The research is based on a national level telephonic interview conducted in the US involving 1,500 parents. They were asked to report their child’s activities in past 24 hours and whether the TV remained switched on in the background.

The researchers are still not clear what effects that this practice might cause but there are various suggestions that hint that the background clamor disturbs the healthy development of children.

Matthew Lapierre of the University of North Carolina Wilmington who led the survey says that because of the television distraction, children spend less time playing with other kids and talking to their parents.

TV viewing before bedtime may also lead to sleeping problems and children feeling tired during the day. Some experts also say that too much exposure to television may lead young children to snack more and pick bad habits like smoking and drinking more easily.

“We definitely need to rethink this sort of exposure,” he said. “You have learned how to deal with this, but what does it mean for a very young child?”

What was another shocking find was that younger children were exposed to the television more than older kids. Lapierre found that toddlers under two, for example, spent 5.5 hours around the screen daily. Exposure was also more for kids who had a TV in their own rooms and in African-American families.

The results of the survey have been published on Monday in the journal Pediatrics.

The American Academy of Pediatrics recommends that TV and other media viewing for kids should be limited to two hours per day. They also add that TVs should be out of bedrooms and kids under two should not be exposed to the television at all.

For infants and toddlers, studies suggest TV may slow down language development, according to Strasburger.

“Think about it,” he said. “It’s confusing for babies who are trying to get their language together to have indistinguishable voices in the background.”

“The babies that are being read to are just chattering away, and the babies that sit in front of a TV are silent,” he said. “It means their language development is threatened – they may catch up, but it’s a concern.”