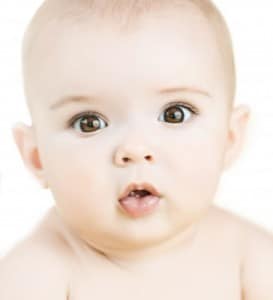 For infants, visual development is critical between six and 12 months of age. It is during this time that optometrists can start to detect vision problems in children, particularly those that may impede the child later in life. Yet according to experts, one out 10 infants in America has an undetected vision problem.

Based on a survey conducted by the American Optometric Association, only 18 percent of all parents took their child in for a comprehensive eye assessment before their first year. Unfortunately, untreated vision problems in infants can lead to developmental delays, permanent vision problems and even life-threatening health complications.

“It’s difficult to notice vision problems in infants without a thorough, comprehensive eye exam,” said Dr. Glen Steele, optometrist and chair of the InfantSEE committee – a program designed to provide free, professional eye care for infants. “Even if a child is hitting all his or her developmental milestones and not showing any signs of problems, there could still be issues with the child’s vision. Identifying problems and beginning treatment as early as possible is key.”

But if the situation is so dire, why is it that so few parents take their child in for an eye exam?

Some infants may be at a higher risk for vision problems, including those who:

No matter what the risk of an infant, however, the American Academy of Optometry suggests that all infants have their first comprehensive eye exam at six months of age. As long as no vision problems are present at that time, the next exam can occur at age three. After that, children should receive an eye exam before school starts and every year after.

Experts also warn parents to avoid taking a pediatrician’s clearance on vision problems during the first year of life. Many optometric problems can only be detected by an optometrist, and many infancy vision problems need to be monitored and treated by a trained optometrist. In some cases, a referral to a pediatric optometrist may be necessary.