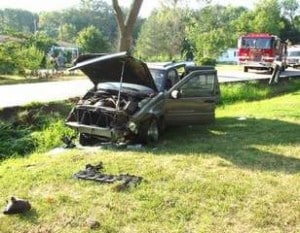 eds of a suspended police captain has saved the lives of a young mother and her five month old child.

Delmas “Gee” Pack, captain of the Felicity Police Department, watched as an SUV spun out of control and into a ditch just outside of his house. He recalls the SUV flipping over once before landing upright. As he approached the vehicle he noticed that the passenger side of the vehicle took most of the damage in the accident, the engine had caught fire, and a woman in the drivers seat had gone into shock.

“I got the door open to get the lady out, I noticed the baby in the back in the car seat. It was behind the passenger seat. That was the side that took the most impact. The car was on fire underneath the hood.”

“But I finally got the baby out of there.”

The new mom was trying to feed her baby a bottle from the front seat of the car, taking her eyes off the road for only a split second. In that time the vehicle began to drift over the white line. Rhiannon panicked and jerked the wheel to correct her mistake. The next thing she knew the vehicle was in the ditch.

“The baby was in the back seat, screaming, I leaned back with his bottle and as soon as I took my eye off the road, I came too close to the white line. I tried to jerk it. I lost control of the car and flipped it. The next thing I knew “Gee” Pack … was helping me out of the car. The car caught on fire and I was screaming for my son.”

On lookers, concerned the vehicle was going to explode, were yelling at Pack to get away from the car. Pack ignored the warnings and continued to struggle to free the trapped passengers.

“He saved my son’s life”

Jay Fox, one of Pack’s concerned neighbors who tried to sway Pack from running towards the burning vehicle recalls “He didn’t care about the fire. I don’t know how high the flames were. It was burning pretty good. I do believe he is a hero.”

The emergency crew finally arrived and managed to put the vehicle fire out.

Rhiannon and her son were taken to Mercy Hospital Anderson where they were later released neither of them suffered any serious injuries.

“My son is perfectly fine. He didn’t have one scratch on him. Me, I have bruises. I’m really sore. I have scratches from the glass.”

Pack does not consider him self a hero for what he did, he considers it his duty as an officer of the law.

Pack was suspended on suspicions of tampering with evidence and records on a drug related case.

Ward was later charged by the Ohio State Highway Patrol with operating a car without reasonable control. – Jeff, Staff Writer