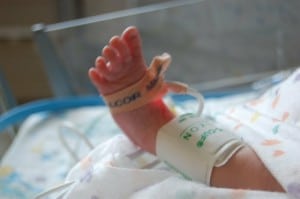 Approximately one to two infants out of every thousand born have a congenital heart defect. Undetected, this condition can be life-threatening. If caught early, however, it can often be corrected with one or two simple surgeries. The problem, however, is that many infants born with the condition lack an audible heart murmur. This has left many heart defects undetected.

Eliminating this problem was the purpose of a recent Swedish study that has now gained some national attention. The Sahlgrenska Academy at the University of Gothenberg and the West Gotaland Regions maternity units in Sweeden found that, by performing a simple pulse oximetry test – a test that checks the oxygen saturation in the blood – 92 percent of all congenital defects can be detected. The test takes just moments to perform and it can be done before the infant is released from the hospital.

The Swedish study has gained a lot of global attention. While there is not currently a national recommendation for the testing in Sweden, many counties are already using it. Currently, all infants in Beijing, China are being tested with the protocol before being discharged. Last week, the US Secretary of Health gave their full support to the Swedish protocol and they now recommend that all United States hospitals use the protocol before infant discharge. Singapore, Vietnam and Argentina have also shown interest in the study and the author of the study, Anne de-Wahl Granelli, has been invited to these countries to present the data.

“People around the world are now talking about ‘the Swedish study’ and I’ve been invited to Nanjing in China to help start up a screening program this autumn,” de-Wahl stated.

But de-Wahl isn’t willing to take all of the credit. “I’m absolutely delighted that the research has had such an impact. My colleagues and everyone else who helped us with the clinical side of the study over a three-and-a-half-year period all deserve a share of the credit for the attention it has been given worldwide,” she said.

As more and more countries implement the protocol, it is expected that mortality rates for infants with heart defects will reduce drastically. Researchers found during their studies that infant mortality rates of infants that left the hospital with an undetected defect was around 18% but for those in which the defect was found and treated before discharge, mortality rate was only 0.9%.