Identical twins, Brittany and Cynthia Daniel have always been very close.  You may recognize them from their hit 90s TV series, Sweet Valley High. Recently Cynthia gave her sister the one thing she couldn’t ever have – the gift of motherhood. 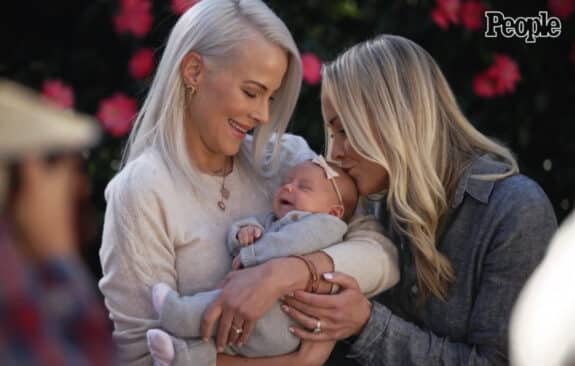 In 2011 Brittany underwent a battle with stage IV non-Hodgkin’s lymphoma where she endured six months of chemotherapy.

After her fight, she learned might never be able to have children on her own.  Fertility specialists revealed the chemo had a diminished egg reserve and getting pregnant on her own would likely be impossible.

Brittany approached Cynthia with the idea of egg donation and she “didn’t hesitate,” she recalls. “Words cannot express how grateful I am to her.”

Mom to kids Ryland, 17, Colt, 13, and Steely, 8 with actor Cole Hauser, Cynthia saw the donation as  “a simple gift I could give to her.  I know Brittany would do it in a split second for me. And we’ve always shared everything, so why not this?”

Devastated, Brittany remembered, “I thought I might have to wrap my head around not being a mom in this lifetime.  I fought so hard to get there, and I was so scared it wasn’t going to happen.”

For their fourth attempt, the couple used Cynthia’s egg and a surrogate and on Oct. 24, 2021, they welcomed their daughter Hope.

“I just let out this primal cry,” recalls Brittany of meeting her daughter. “The entire room was bawling because they just all knew what we had been through.”

In December Cynthia was finally able to met her niece.

“I wasn’t sure how I was going to feel at first, what emotions would come up,” she says. “But I just felt like the aunt. And that is really special.”

They are also considering expanding the family using another embryo created with Cynthia’s egg.

For now, new motherhood is “beautiful,” Brittany says. “It’s better than I ever thought it could be. My sister made my dreams come true.”