Home » Tablets and Toddlers: Are They Helping or Harming Development?

Parenting has changed drastically over the last decade. When we were children, we may have received some much coveted television time during the weekends or after school. But, for the most part, we engaged in imaginary play; we entertained ourselves with toys, books and with the great outdoors. And when we ran errands with our parents, we knew we needed to bring our own toys to avoid boredom. But children (and parents) today have an advantage that they didn’t have: user-friendly electronic devices. 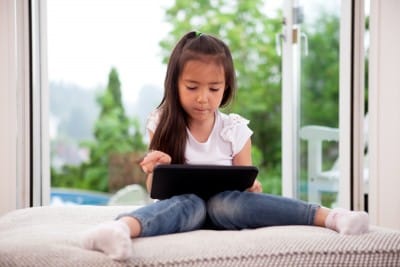 Parents all across the world are introducing their children to user-friendly devices like the iPad, sometimes as young as just a few weeks or months old. Unfortunately, because these devices have only been around for a few years, there’s no hard evidence on whether or not they stunt healthy child development. It’s for this reason that we, as parents, have to wonder if we’re hurting or harming our children with media time at such a young age. Some experts believe so.

Barnard College’s renowned Center for Toddler Development invited “Nightline” into one of their studies in which observers watched young children play with tablets and then toys. Observers were monitoring for “distractibility,” but they also watched for things like social communication and imaginary play.

While playing with the tablets, the children were so zoned out in the apps they were on that they didn’t’ even respond to the researchers in the room. Only one little girl named Viv managed to resist the pull of the electronic devices – rather than playing on them, she created played with dolls and created a make-believe world of her own. However, when the tablets were confiscated, the rest of the children went for the toys. They interacted with the researchers and invited them into their imaginary play.

“You see how much their vocabulary has gone up, and they are talking to each other,” Tovah Klein, the director of Barnard’s toddler center who specializes in social and emotional development said to “Nightline” interviewers as the children interacted with the researchers and each other.

Researchers say that it those socialization skills and imagination that are squashed by spending too much time on tablet devices like the iPad. But there’s another issue, according to Klein. When families use the devices to calm their children down, children fail to learn the coping skills they need to calm themselves down later on in life.

Sharla Klaus, a mother from Whitehouse Station, N.J., knows just how reliant her family is on the use of their i-devices. Her daughters, Devon, 9, Delaney, 7, and Dalton, 4, are fluent in iPhones and iPads; they can navigate apps just as well (if not better) than you average adult. And for Sharla, the devices provide some much needed solace when the family is out and about.

“From a distraction perspective, if we go out to eat, which we never do, and they are out of control, we can whip [the devices] out and they will be completely distracted until the food arrives,” Sharla told ABC News.

She and her family were challenged to give up their devices for an entire month, cold turkey. At first, the girls struggled with the transition. Devon and a friend played with a pretend iPad for a while, and the girls argued much more than usual without the devices to keep them occupied. But eventually, the girls found their niche; Devon learned how to sew and started doing it every morning right after she got up. And, even though she said that she probably wouldn’t continue her morning routine once the devices came back, she said she would probably continue to sew daily. And it seems that Sharla has learned her lesson as well.

“It’s the amount of time that you allow kids to play with anything, how much time they watch tv, how much time they use the devices,” Sharla’s husband said. “Yeah, the limits,” Sharla added. “if your child is the one who never looks up and is constantly glued to it, then that’s not a good thing, regardless. If they continue to have great social skills with other friends, if they’re still doing the play dates, and they’re still getting outside, and they’re still playing well with each other, I think that anything within moderation.”

Sharla’s statement poses an interesting question: Can we, as parents, give our children the freedom to enjoy screen time without having to feel like bad parents? Is it possible to have the best of both worlds?

Research indicates that screen time does not affect eye development. However, studies have linked too much passive media time to behavioral issues in young children. It is for this reason that the Academy of Pediatrics recommends that children under the age of two not watch any television. But tablets don’t aren’t always passive; in fact, many apps designed for children are very interactive.

Sesame Workshop, the non-profit organization behind the Sesame Street characters, has been working at designing interactive apps for children and parents.

“I’m trying to create content to engage you to interact with your child…so you can extend the learning,” Rosemari Tuglio, the vice president of education and research for Sesame Workshop told ABC News. She doesn’t believe that it’s bad parenting to put a tablet in child’s hand. In fact, she believes that apps can teach more than just letters and numbers. For example, she says that apps like Angry Birds can help children understand the basics of physics if parents take the time to enjoy media time alongside their children.

A long-term study, just released from the Millennium Cohort Study seems to fall in line with Tuglio’s beliefs. The report, which followed the lives of 19,000 children born between 2000 and 2001, found that toddlers actually learn better from interactive media. So, it would seem that, for now, parents can feel good about giving their children interactive media time, just as long as they remember a few important key points: parental involvement is best, tablets shouldn’t be used to pacify, and moderation is the key to ensuring that screen time doesn’t damage socialization skills.