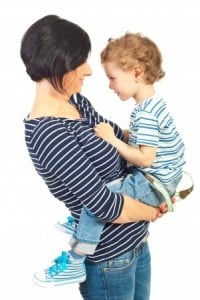 The prevailing wisdom among childcare experts is that you should avoid television for your baby for the first two years. However, that doesn’t mean they should be growing up without linguistic stimulation. In fact, the more you talk to your baby, the quicker they will be to comprehend complex sentences and take in vocabulary. We’re not just talking about “doggie” and “kitty” but regular conversations.

“You’re building intelligence through language,” is how Stanford University psychology professor Anne Fernald explains it to AP News. “It’s making nets of meaning that then will help the child learn new words.”

As example, instead of saying “banana” and “bowl” try, “We’re going to put the banana in the bowl with the grapes and apples. The longer and more complex a sentence is the more the baby will begin to develop those important cognitive language skills.”

“The advice I give mothers is to have conversations with your babies,” said Erika Hoff, a psychology professor at Florida Atlantic University, to the AP. “Children can hear lots of talk that goes over their head in terms of the meaning, and they still benefit from it.”

These new research findings were presented at a recent meeting of the American Association for the Advancement of Science. The thrust of the study is to determine if universal preschool for disadvantaged toddlers will help them catch up with their classmates. The theory goes that babies in low-income families might not be exposed to these kinds of robust language interactions as their affluent counterparts. Previous studies back up this area of concern.

In that research, scientists found that the less affluent the family, the less words that a baby will hear. In some cases, this can lead to five-year-olds being at least two years behind in the natural development of their communication skills. That is a tough gap to overcome. Keep in mind that this gap can start to show up in babies as young as eighteen months.

An example of this kind of language processing can be found in the simple sentence, “The puppy is on the sofa.” The young one will know “puppy” and then be able to figure out what “sofa” is but only when those two thoughts are strung together in a complex sentence. If they can’t even embrace what “puppy” is, then there is no hope for “sofa.”

To support her research, Dr. Fernald had new parents carry around recorders. In a single day, one child heard 12,000 words of directed speech. Another only heard 670. Guess which baby did better with speech processing? For the control group, mothers enrolled in an eight-week language training for toddler talk and engaged in higher-quality communication. The results were that by year two, the babies have expanded vocabularies and were able to process the language faster.