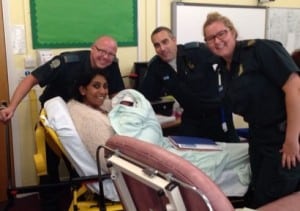 Diane Krish-Veeramany went to school on Thursday, prepared to teach her class, but after attending the school’s morning meeting, it became very clear that she wouldn’t be doing any teaching that day.

Right after the morning meeting, Diane said she felt ill. She asked to go home, but her colleagues were concerned, right from the start, that she had something more going on than just a slight illness.

“I texted my husband to come and get me…but my colleagues asked if I wanted an ambulance,” Diane told BBC News. “I said ‘I’ll just go home’ – I just didn’t think it would be a contraction as it didn’t feel like one.”

Already a mother to one child, Diane waited patiently for her husband. But just minutes after sending the text to her husband, it became apparent that she was, in fact, in labor.

Teaching assistants Dita Gojnovci, Chris Sword and Sam Mustafa stepped in and helped. All three helped her deliver her baby, little Jonah, in one of the school’s classrooms.

And, before long, baby Jonah was resting safely in his mother’s arms.

“It all just happened really quickly – within 20 minutes of these phone calls, I’d had Jonah,” Diane said. “Luckily, my husband got to the school before I gave birth.”

Shortly after the birth, paramedics transported mom and baby to Queen’s Hospital, in Rumford, where they were later released. Now, they have an exciting birth adventure that will likely be shared with little Jonah someday.

“We now joke that he was late for his first day at school as he was born after the bell,” Diane said. “The school has named the room he was born in after him – it’s now called Jonah’s room.”