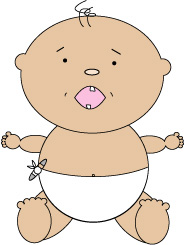 My son has been teething for about 5 months now. Every so often we think that a tooth is going to appear but …nothing. Most of the babies that he was in the hospital with now have teeth.

So while we have no hardware, we definitely have symtoms. Lots of drool, chewing, ear pulling and crankiness. The bottom two teeth are supposed to arrive first, between 6 & 7 months. Next are the top two, also between 6 & 7 months. The incisors on both sides are next, with some molars between 10 & 14 months.

While I do wonder were his teeth are hiding, I know that they have to appear eventually. Could there be people out there that have never gotten their teeth? Nah!

Teething is blamed for everything that is wrong in a baby’s life. Every time he does something unusual someone will pipe up and say, “I bet he’s teething. Babies usually do _____ when they’re teething.” It makes you wonder how one event can be responsible for so many things. The New Parents Guide even says that diarrhea, coughing and runny nose can be caused by teething.