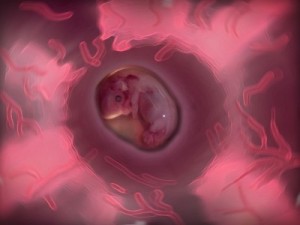 When Dara and Kevin Nelson read a story about a family trying to find takers for their frozen embryos they were intrigued, and wanted to know more. Now the couple is expecting their 12th child, an embryo they adopted from another family.

Dr. Jerald Goldstein, a Dallas area reproductive endocrinologist, has been offering embryo adoption for a year, but had no takers until the Nelson family came along. The original parents had a set of frozen embryos that were found to have a high possibility of a fatal genetic illness. Unwilling to take the risk themselves, but not wanting to have the embryos destroyed, they began looking for another couple to take on the embryos.

This is Dana’s second time being implanted with adopted embryos. The first pair of embryos resulted in their daughter, a healthy girl who shows no signs of fatal health defects. Now the Nelsons are waiting to see how the second set of embryos will fare.

The Nelsons already have 11 children, from both birth and adoption. Six of their children are biological, four where adopted internationally. The youngest, Merianne, is considered to be adopted, though the couple sometimes forgets that.

“Is she adopted? Well, yeah, in a way,” her husband said. “But as parents, you forget, because you went to the hospital and delivered her.”

Since their successful first transfer, the couple has become vocal in advocating for more families to adopt embryos. The cost of the adoption was $4,000, with medical costs covered by the couple’s insurance.

“That’s one of the things we want people to know,” Dara Nelson said. “There’s embryos available, and it’s a great option for someone who would like children and experience pregnancy and, for whatever reasons, are unable to on their own.”

Embryo adoption became legal in the US in the 1990s. Currently, there are 400,000 frozen embryos being stored in various clinics. The government has recently set aside funds for an embryo awareness public adoption campaign.