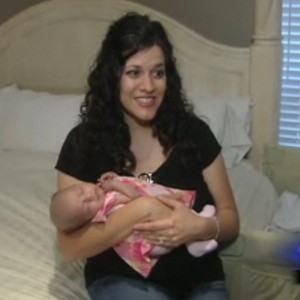 A Texas dad was put through his paces and earned his Father’s Day this year, by assisting with the delivery of his third child.

The couple had been at a birthday party with their 2 other children when Charla fell ill and went home early. Shortly after arriving home her water broke causing her to go into labour. The quick thinking dad then called the family’s doctor, Bryon Blunder 3 way on his way home for further instructions and even though he instructed Charla to not push, the baby had other plans.

When Ricky arrived home just a couple minutes later he found Charla on their bed with newborn Adrianna between her legs.  The baby was still attached to her mother by the umbilical cord.  She was purple and was not crying.

“The two things I knew I had to do,” said Ricky, “were suction her and make her cry.”  Then Dr. Blonder talked Ricky through the process of cutting the umbilical cord.

Dr. Blonder gives Ricky credit, “He was calm.  I think I panicked more than he did because this never happened to me.”

After examination, it was discovered that Charla had suffered a ruptured placenta.  Had the baby not been delivered so promptly, things could have taken a tragic turn.

Adrianna was recently discharged from the Neonatal Intensive Care Unit.  She is a month old and weighs in at five pounds six ounces.  Her family was glad to have her home in time to celebrate Father’s Day.  – Jen R, Staff Writer.