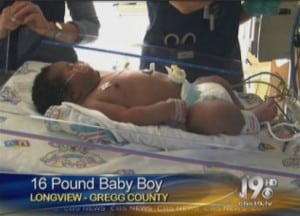 When doctors warned the Browns that they might be having a big baby, they were prepared for a 12-13 pound newborn. But Baby Jamichael proved the doctors wrong on Friday when he came out even bigger  weighing 16 pounds 1oz and becoming one of the biggest babies born in Longview Hospital and maybe also in Texas.

Already being referred to as ‘The Moose’ in the hospital, JaMichael’s parents were happy but also surprised.

‘(The Dr) told us he was going be about 12lbs, but when he pulled him out it was as different story,’ his father Michel Brown said. 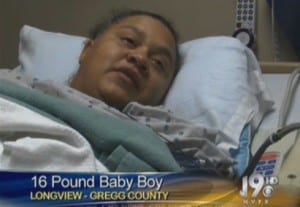 His mother Janet Johnson, still weary after the operation said,

‘We’re just amazed. I can’t believe he’s that big. A lot of the baby clothes we bought for him will have to be returned. They’re already too small for him to wear.’

Janet gave birth to JaMichael on Friday morning via C-section. The baby had a head full of beautiful black, curly hair and was also 24″ long, with his head measuring 15″ and chest 17″. Normally, these are the statistics for a three to six month old baby.

For the staff at the hospital too it wasn’t an easy task delivering such a big baby.

Nurse Mary Beth Smith who has been with the hospital for 20 years said,

“This is the biggest baby I have ever seen.” 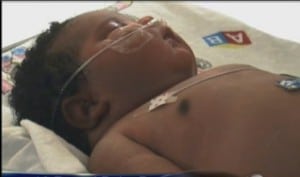 Janet had suffered from gestational diabetes during her pregnancy and that is most probably the reason for JaMichael’s extraordinary weight.  The newborn was taken to the neonatal intensive care unit after birth to bring his blood sugar level under control.

“He’s getting fed through a feeding tube and they’re checking his blood sugar,” said Janet.

“It’s a beautiful baby,” said Nurse Smith. “But for health reasons. We’d rather not see a baby this large … They can have a little harder time maintaining their blood sugar.”

The baby will probably be at the hospital for a few more days before he can join his parents and three elder sisters aged 18, 16 and ten at home.

Michael hopes JaMichael grows to become a footballer. But the parents are not planning to extend their family any time soon.

She is surely going to have her hand full caring for her big bundle of joy for the time being.

While the hospital staff is sure this is the biggest baby they have seen being born, the state records of Texas have yet not confirmed if JaMichael is also the state’s biggest baby. The world record is 23 pounds and 12 ounces.