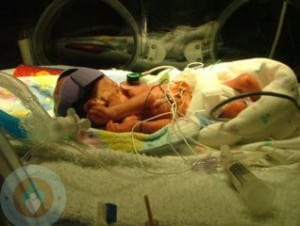 Just a couple hours after my son was born

Five and a half  years ago I went into labour at 23 weeks 5 days.  At that time the OB told me that if I delivered my son that day she wouldn’t resuscitate him.  It was a really tough time for my husband and I because, in the 5 days that I had been at the hospital, we had been counseled by many doctors listing all of the problems that our child could have if he/she was born before 27 weeks.

Lucky for me, my son held on and arrived at 24 weeks 1 day.  While we were excited that our whole pregnancy ordeal had ended, a new journey began and with it many cautionary sessions from the medical team at our hospital.  From birth, we were warned that he would probably not walk, talk or even survive.  Forty-five percent of babies born at 24 weeks don’t make it and my little guy, who weighed in at 490gms at his lowest weight, was definitely looking like he may not make it.

Week after week, new issues came up and new concerns were brought forward about the future health of our son.  With every meeting, I stayed positive and hoped that, in our case, they would be wrong. 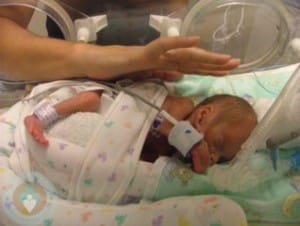 To our surprise our little guy started to thrive and meet tiny milestones that we were told that he would never achieve.  I stayed with him day and night to make sure everything that could be done for him was. I was in love.  I even pumped every 2 hours to ensure that he would have enough breast milk to help him grow.

As we went through our journey we were prepared at every step that our son would be different.  He would need lots of therapy and there may be lots of things that he would never do.  As parents, we had always wanted a baby and never thought that this would be our story but when we were smack dab in the middle of it, somehow the details didn’t matter.  We had come to realize that we were given this tiny baby because we had so much love to give and we were prepared to do whatever it took to help him become a great little boy. 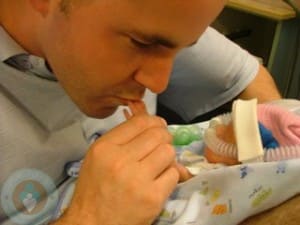 After 3.5 months of being in the NICU our son was transferred to a level 2 nursery and then released home just a couple days after he was originally due to be delivered.

For the next 3 years I toted him to every specialist and therapist that would see him.  Sometimes 2 or 3 appointments a day.  LOTS of developmental toys, many frustrating days, not a lot of sleep but he was progressing.  He was late hitting every milestone but he hit them and it was very exciting for us.


Now 5 years later, my son has been diagnosed with Autism, he needs a full time EA at school but he is doing well.  He has LOTS of sensory issues, is a technical freak and can be set off by a sound that he is not familiar with.  Feeding is still an issue.  He won’t eat anything that is cold or sweet and still needs to nap during the day to keeping him from melting down in the evening. 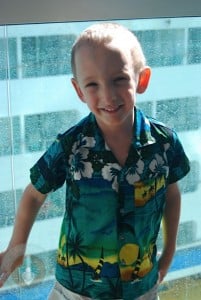 He has come leaps and bounds from where he has started but he has taught US many lessons and I don’t know what I would do without him.

This week there has been a lot of talk about resuscitating babies born before 24 weeks and whether doctors are doing more harm than good.  It is well know that a baby born extremely premature is at risk for being severely disabled and having long-term issues with breathing and feeding.  In recent years the survival rates for 24 week babies have almost doubled while the outcomes for babies at 23 weeks haven’t changed dramatically.

In the 5 years I have been writing this site, we have covered MANY babies that have survived and gone on the thrive after being born at 23 weeks.  The outcome isn’t always ideal or what some would call perfect but there are never any guarantees – even with a full term baby.  Through my experience at the hospital and my time covering the many amazing babies that we have written about here, I have learned that most parents quickly step up.  They want to do whatever they can for their babies.

Parenting is rewarding in so many ways and I would have been devastated if the medical team at our hospital didn’t try.  There shouldn’t be a line drawn in the sand that says because this baby isn’t a specific gestation they shouldn’t be resuscitated.  Neonatologists should look at every baby case by case to see if that baby qualifies for medical intervention.

Parent should also do their homework and talk to others who have preemies to help them understand the volume of information being thrown at them before they make decisions about disconnecting a baby or not resuscitating.  These little guys are stronger than we give them credit and the fact that 35% of the babies born at 23 weeks are surviving means that doctors should at least try when they are born.

There are never any guarantees in life but we made the decision to give our son everything we had and we have never looked back.

This should also not be about money.  If you took the oath, you should do the job.