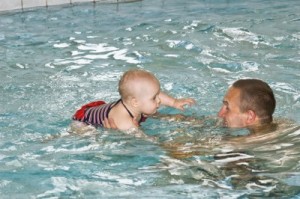 The American Academy of Pediatrics recently updated their recommended guidelines for water safety and drowning prevention for children. The update is based on new information on drowning and safety, and should be followed by all parents.

Aligning themselves with new research and the World Health Organization’s classification of drowning , the AAP has revised their previous guidelines for water safety. The biggest change has been their lifting of recommendations against on swimming lessons for toddlers. In previous years, the AAP advised against parents taking young children to swimming lessons feeling that these lessons gave parents a false sense of security with their children. The new position is neutral, neither recommending lessons for nor advising against lessons for children ages 1-4 years-old.

The AAP still feels, however, that infants under 12 months of age should not take swimming lessons, nor be expected to be able to swim well at a young age.

“In recent years, water-survival skills programs designed for infants younger than 12 months have become popular both in the U.S. and internationally,” they wrote. “Many movies of tiny infants who have been taught to swim underwater, float fully clothed on their backs, and even cry out for help have emerged on the Internet. Although there are anecdotal reports of infants who have ‘saved themselves,’ no scientific study has clearly demonstrated the safety and efficacy of training programs for such young infants.”

“Unfortunately, many parents do not consider fencing for an inflatable or portable pool, and such pools often fall outside of local building codes that require pool barriers,” the authors wrote. “Because they contain such large amounts of water, these pools are often left filled for weeks at a time, which presents a continuous danger. The soft sides of some models allow children to lean over them and easily fall into the pool headfirst.”

Special drain covers, vacuum-release systems, and filter pumps are also encouraged to prevent children from becoming entangled in pool drains. From 1990 to 2004, 13 children drowned due to having hair tangled in a pool drain and being unable to free themselves.

Drowning deaths have decreased significantly from 1985, when the rates were 2.68 per 100,000 children. Despite this, drowning is still the second largest cause of unintentional death in children today. – Summer, staff writer