For 2 hours this afternoon, the world stood still as the US Air Force and the Federal Aviation Administration (FAA) dispatched two helicopters to chase an air balloon, believed to be carrying 6-year-old Falcon Heene. 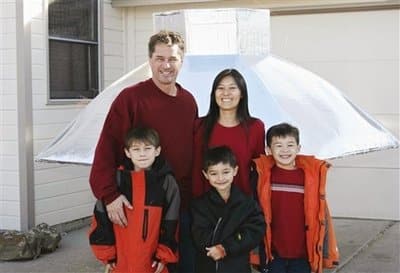 The balloon’s 40-mile flight was followed so closely by emergency services that they were on the scene within seconds when it finally touched down. A sheriff’s deputy sprinted across a ploughed field and grabbed a tether to prevent it becoming airborne again. Rescue workers were dreading what they would find inside.

They soon had their answer: nothing. For Falcon Heene had been safe at home all along, hiding in a box in the attic over his father’s garage.

Just before sunset, with hundreds of rescue workers combing about 150 square miles of fields across Colorado, police made their discovery. Sheriff Jim Alderman burst into a live press conference: “He’s at the house,” he said. Mr Alderman said there was “no indication” that the event had been a hoax, adding: “This is not the first time when we have been involved in searching for some child and they hide because they’re afraid they’re going to get in trouble.”

That is what everyone thought until the family was interviewed by Wolfe Blitzer. When asked why he didn’t come out when he heard everyone calling his name, Falcon said, “It was for the show.” (huh?)

Taken a back, the boys parents stuttered and then attempted to change the subject.