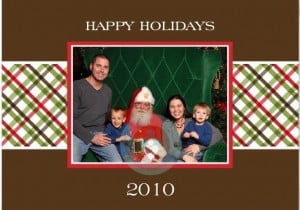 screenshot of the card

Early on in the Holiday season I was approached by a photo processing site to blog about their Christmas cards in return for 50 free cards.  At the time I was too busy to write the post up, but decided to use them when I went to purchase my family’s cards because they had a beautiful collection of options.

Anyone who knows me, knows that I take my photo processing very seriously.  Every year we get some nice pictures of our kids taken for the annual card and this year was no different.

I dressed the kids up twice to get their pictures done with Santa and after 26 photos we finally got the ‘one’.  Once home, I searched for some cute pictures to put inside the card, found the perfect holiday phrase and sent the order off – December 8th.

Five days later another e-mail was sent to me confirming the order stating that they would arrive between the 17th and 27th of December, which was weird because I had paid $19 for shipping, an amount that would normally indicate that a courier would be bringing my package.  I was wrong.  The 17th came and went and so did the 27th – no cards.

On the 24th we were forced to buy store bought cards for our family after the ones we paid $75 for didn’t arrived.  On the 28th I called the photo company.  The customer service rep was very nice, apologized and issued me a full refund.  While I was thankful, I couldn’t help but feel like the point had been missed.  I didn’t want a refund, I wanted my cards – the ones I had designed perfectly to be handed out to our family.  This was important to me because it is the only picture many of our family members get all year of us and after all of the planning and work I went through to set it up, I had nothing to show for it and no time to get something new printed.

So here we are the 5th of January, almost a full month after I ordered my cards and still nothing.  And while it may seem like a small thing, I get madder as every day passes.  The photo company tells me that because I live in Canada shipping takes much longer.  I think this is a crock because their site lists that processing should take 5 days and international shipping 5 more days.

When I called a second time all the rep could offer was to reprint with a turn around time of 2 weeks.  At that time, it would be close to the middle of January, which would be ridiculous as that would mean that our cards would reach our family around the 20th or so for CHRISTMAS cards.  Cards I ordered with more than enough time to be out for the holidays.

So at this point it is safe to say that Shutterfly will never get another order from us or a recommendation from this site. As many of our readers know, I never write anything bad about companies because that is not why I created this site.  But in this instance I am just too frustrated at the situation to not say anything.

Hopefully our experience with another company next year will be better and I apologize deeply to our family members for not sending anything this year.  As you can tell – it was beyond my control. – Lisa Arneill, Founder & Editor