Home » The Jepps Talk About Raising Their Identical Quads

Last Summer we introduced to your to an amazing couple that drove 325 miles to Great Falls for the births of their quadruplets because hospitals in Calgary were at capacity. 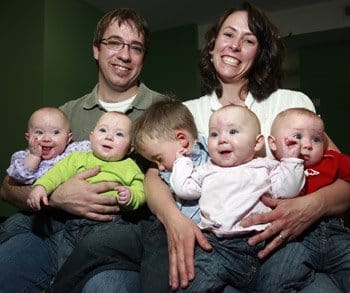 After spending just a few days in the US hospital 2 of the quads were healthy enough to be transferred leaving Karen, their mom, and the remaining 2 girls a country away.

At that time Karen and J.P Jepp were reluctant to speak to the media about the four miracles they had just welcomed into their lives.

Now that the babies have been home for a few months, the couple opened up to Michelle Lang of the Canwest News Service about how their lives have changed since the arrival of Autumn, Brooke, Calissa and Dahlia.

On this day each baby wears a different colored outfit.

The outfits help differentiate each member of this rare set of quadruplets, identical in every way from their blue eyes and chubby cheeks to their broad, toothless grins.

The quadruplets have grown remarkably from their birth weights, which ranged between two pounds six ounces to two pounds 15 ounces. The girls now weigh between 14 and 17 pounds each, with Autumn the largest baby and Dahlia the smallest.

While the babies have done well since their release from the hospital, Calissa needed to be re-admitted in December after she developed a severe bronchial condition.

Her lungs were already compromised from whooping cough, which she contracted in the fall, and doctors didn’t know if she would make it. On Christmas Eve — after a stint in the intensive care unit — her condition took a turn for the better.

The family was lucky to have Calissa back home in January and the family of seven has been settling into a routine ever since.

Like many multiples parents, Karen and J.P rely on volunteers to help out with the babies overnight so that they can get sleep and spend some one on one time with their 3 year old son Simon.

The Jepps say they couldn’t have survived the past few months without their friends, family and donations from local businesses who have given them everything from formula to the 24 diapers they go through every day. Volunteers such as Michelle Wilks from Children’s Cottage Society help Karen out on Thursdays so she can spend at least one day with Simon.

Each baby is already starting to show their individual personality.

Karen says Autumn, the oldest by a matter of minutes, is a leader, while Brooke is a quiet observer. She describes Calissa as feisty and Dahlia as a “spark plug.”