Home » The McGhee Sextuplets Make Their Debut On The Oprah Show

Rozonno and Mia McGhee have already become familiar faces throughout the world thanks to their sextuplets and the incredible pictures of the family that have become an internet sensation. Rapidly growing cuddlier and cuter, the sextuplets along with their mom and dad made their debut at the Oprah show where many surprises were in store for them.

The show gave the couple a chance to reminisce their childhood and also reveal the story of how the miracle babies came into the world.

Both Rozonno and Mia were raised by single mothers and had to battle the challenges of a crime-ridden, low income community.

As teens they found each other and got married at a young age of 18 and 19 years.


“Since I didn’t have a father, I’ve always wanted my children to have a father,” Mia says. “I wanted, of course, to graduate from high school, go to college, get married.” 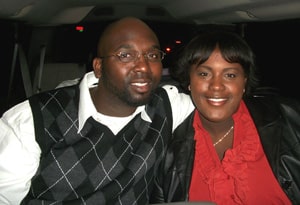 After establishing their careers and buying a home the couple started planning for a child. Unfortunately, they could not conceive naturally and began fertility treatments.

The first joy for the McGhees came when Mia became pregnant with twins. But the joy was short lived. Mia went into pre term labor and just after the babies were born tragedy struck.

“They were kicking and moving and everything. But when they clipped the cord is when they died,” Mia says through tears. “I remember when it hit me. [I thought,] ‘My God, why did this happen to us?'”

Overcoming the grief, the couple tried again and this time were blessed with not one or twin but six babies at once.

On 9th June 2010 Olivia, Madison, Rozonno Jr., Josiah, Elijah and Isaac were born weighing between 1.5 and 2 pounds each. Spending some time in the hospital to gain weight and get stronger the babies went home last October and are now cuddlier and cuter than ever before.

It is not an easy task to take care of six infants at once, but despite the sleep deprivation, diaper changing routine and the taxing job of raising six babies, the McGhees are thankful for all they have been blessed with. “It can become overwhelming, but it’s a joy,” Mia says. “It’s a joy being a mom now.” 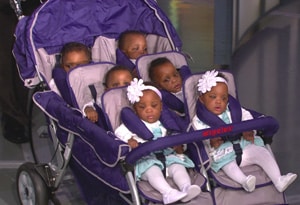 Mia now stays at home while Rozonno runs his carpet-cleaning service called McGhee Carpet and Upholstery Cleaning. They also get a lot of help.

“Most days, maybe two or three people come throughout the morning and then the night to help with baths and help with cleanup,” Mia says.

The mother of sextuplets has also learned to manage her time and tasks well. She says she sticks to a strict schedule, keeps the home tidy, washes the baby bottles as soon as they are empty and makes sure there are no dirty diapers lying around the home.

Changing six diapers in 10 minutes flat, the mother says while on their way to the show, “”When I was at the airport, I actually held one baby and changed another.” For the trip the Mcghees had to fill six pieces of luggage with 150 diapers and extra formula, toys and clothes. They also asked four of their friends to come along to help.

The eight-month-old sextuplets have now also started to show their unique personality. According to the parents, Rozonno Jr. is the laid-back one, Elijah is the cuddly one, Isaac is the jealous one—”He doesn’t want you playing with any other baby. It’s all about him,” Rozonno says—Josiah is the smiley one, Madison is the feisty one and Olivia is Daddy’s little girl.

“I want to make sure I instill values in them. First love God—know God and love God first because he brought them here with purpose,” Mia says. “But I want them also to get an education, a good education. That’s something we’re still working on, which we’re going to do. … And just be productive citizens.”

As a surprise Oprah announced $250,000 in store credit offered by the local Walmart for the family. Along with Céline Dion, she also gave the McGhees another surprise – a trip to Caesars Palace in Las Vegas so that the couple could finally go for a honeymoon after 11 years of their marriage.