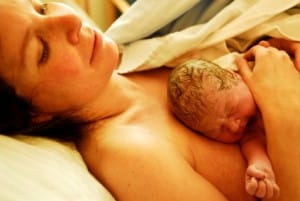 In an attempt to turn one of the world’s most common operations into an experience closer to vaginal birth, a UK doctor has made some changes to the how Caesarean sections are done, which has made the procedure more intimate for expectant families.

“It struck me that all the effort was going into changing normal childbirth but that Caesarean section was still steeped in old surgical rituals,” says Professor Nicholas Fisk, a former obstetrician at Queen Charlotte’s Hospital in London, “In some cases I was horrified; the baby would be dragged out like a tumour and passed to several medical staff before the mother. It was ripe for reform.”

His team focused on three areas.

First, parental involvement: this meant dropping the drape that “divorced” the mother from her abdomen, to allow her to see her baby’s head emerge; the baby itself blocks the mother’s view of the operation.

The second point was physiological: Fisk showed that when a Caesarean is performed slowly the baby is able to “autoresuscitate” – start breathing unaided – while still attached to the placenta, as in normal birth. The baby is “half-delivered” and a combination of the naturally contracting uterus and the baby’s vigorous wriggles allow the lungs to expel fluid in a similar way to a vaginal birth. This reduces the risk of the baby needing help to breathe; a common occurrence after a Caesarean.

“There are now official standards for skin-to-skin bonding in childbirth, but these are almost never met with Caesareans,” he says. One obstruction is that the monitoring equipment needed for patients in surgery is routinely attached to the mother’s chest. “In a natural Caesarean we attach the ECG wires to the back of the chest so that the baby can be placed on the mother after birth,” Dr Felicity Plaat, consultant anaesthetist explains. The anaesthetic dose is lowered so that there is no “heaviness in the arms” to prevent holding the baby, and a clip that measures oxygen in the blood is attached to the toe.

Plaat knows from experience how important it is for a mother to be given her child as quickly as possible:

“My son was passed around, measured, weighed, dressed and even had his hair washed before being given to me. A crucial player, therefore, is the midwife . She has to be enthusiastic and involved. It’s not just ‘dumping baby on mum’ and writing up notes; it’s making sure that the baby is safe, is not going to slip off, and is warm. We put towels over the baby and even bubble-wrap – the kind you buy in big rolls in Ryman.”

Camilla Fisher had one last summer, after an emergency Caesarean two years before.

“It was the most relaxing environment: calm and reassuring,” she recalls. “The staff and my husband were all in green surgical gowns, but it didn’t feel like an operation. When you’ve had a natural Caesarean you wonder why it was ever different. I’ve never felt that I was deprived of a ‘natural birth’.”

It would be interesting to see if doctors in other countries adopt this procedure. It makes sense.