Home » The Spicocchi Quintuplets Are Home For the Holidays 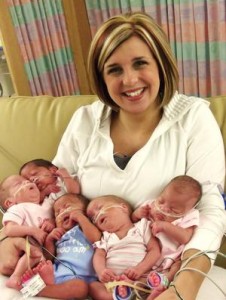 Born four months early in August, the Spicocchi quintuplets are all home and doing well for Christmas this year. The five tiny babies may be too young to know what this gift means to their parents, but they are enjoying the love nonetheless.

Amie Spicocchi was due to have her babies on November 29th, however health problems meant the babies had to come four months at 24 weeks and 3 days. When they were born, the doctor only gave them a 50 percent chance of survival. Having them all home and well for the holidays has been a huge blessing for the family, who still have to worry about keeping them healthy and safe.

Over Thanksgiving, the smallest two of the quints were still in the hospital. Christmas marks the first family holiday that they get to spend at home, all together. Though outside family members have to stay away because of germs, the Spinocchis are still happy to get this holiday together.

“People don’t realize they were only given a 10 percent chance of making it when we found out (we were pregnant with quints),” Vince said. “Here we are now eight or nine months later, not only are they all here but they are doing well. You are humbled by that.”

The Spinocchis have had a lot of help caring for their large family now that the babies are home. Friends and family members have volunteered to help with big tasks such as feedings, diaper changes, and taking all of the babies to the doctor. They also use the services of Postpartum Infant Nurturing Kare, or PINK. PINK offers help to the family for a seven-hour period one to two times a week.

Though the babies are nearly four and a half months old, doctors consider them only 4 weeks old based on Amie’s due date. They have come leaps and bounds from their beginning with Ellie weighing 10.1 pounds, followed by Enzo at 9.13 pounds, and the three girls each at 9.3 pounds. – Summer, staff writer