Home » The Storm About Storm: Is the Gender of a Four-Month-Old Really That Important? 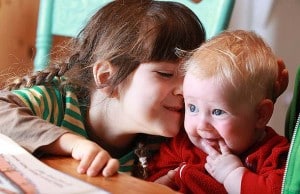 A Toronto couple has taken the, apparently, controversial step of concealing their newborn’s sex.  Parents, Kathy Witterick and David Stocker, made the decision to disclose the gender of baby Storm, only to a small, select group, that includes their two other children.

Their goal is to raise Storm, for as long as they can, in an environment that doesn’t impose limitations and barriers based on gender.

The couple’s other children, both boys, are being raised with similar freedom.  The boys choose their own cloths, and are permitted to grow their hair as long as they like.

They are, evidently, an unconventional family.  The couple’s older son is school age, but does not attend a public school.  He is home-schooled, or as the couple refers to it, he is being un-schooled.  His education does not involve textbooks or testing.  The family also practices co-sleeping, wherein the entire family sleeps together, on mattresses pushed together, in the parents’ bedroom.

But, lots of people home-school, and plenty of families co-sleep; while not the norm, society is increasingly accepting of these practices.  What really has people wound up, is the couple’s choice to mask their infant’s gender, and they have been slammed by some harsh criticism.

All forms of media are buzzing with opinions on this couple’s parenting.  Many are concerned, by the notion, that the couple is using their infant to conduct a social experiment.  There is fear that the child will be confused by this unorthodox parenting.  Some say the couple are selfishly imposing their own ideas on their child.

The couple, who did not expect such a backlash, participated in one interview with the Toronto Star and then put an end to their involvement with the media, stating, to the Star, that they don’t want to get caught up in an unconstructive, back-and-forth conversation with critics.  They added that they don’t want their other children to have the spotlight shone on them any further.

But, are these parents as misguided as their critics would have us believe?  They’re not telling their daughter she’s a boy or vice versa, they’re simply not saying anything at all.  They’re letting him or her figure things out for him or herself.

The reality is, some of the attributes we ascribe to gender are biological, but some are cultural and the moment we pop our babies into a pink or blue onesie, we start the process of teaching them what it is to be male or female in our society.  And, what it is to male or female in our society has certain limitations that have nothing to do with biology and everything to do with culture.

This couple hopes to squash some of the limiting notions their child will internalise early on, with the aspiration that he or she will make decisions based on personality and ability rather than societal constraints.

Yes, they’re imposing their ideas on their child, but who doesn’t?

We all have different ideas about child-rearing, and Storm is an example of one more idea.

Kathy was caught off guard by the reaction to her parenting choice, but isn’t angry.  She’s actually rather encouraged.

“Isn’t defensiveness sometimes a first sign of learning or changing behaviour, so even the ‘rabid’ responses may have a place in making the world a more thoughtful place,” she said.

This couple is unconventional, granted, but not acting out of malice and maybe, just maybe not as far out in left field as some think. – Jen R, Staff Writer