Children are born via surrogates every day, but it’s not every day that a child can say he was carried and delivered by his grandmother. One-week-old Madden Herbert can say that when he gets older. For right now, however, he’s your typical one-week-old infant. According his mother, Angel Herbert, little Madden is “eating like a champ and he doesn’t fuss too much.” 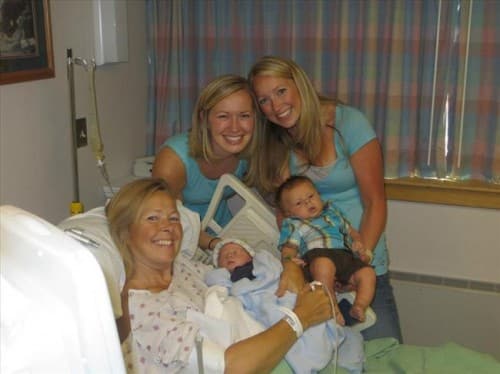 Angel Herbert has a heart condition. Last summer, she and her husband, Brian Herbert were told it wouldn’t be safe for Angel to carry or deliver a baby. Thankfully, Angel’s mother had been offering to serve as a surrogate for her daughter, long before the news ever came.

“It was pretty disappointing and we were pretty upset about,” Angel said about the experience of learning that she couldn’t carry her own child. “But we kind of had an idea that it was a possibility and, all along, my mother was saying, ‘I’m here and I can carry for you.’ I guess we didn’t really take her seriously.”

So Angel decided to call her mother and find out if the offer still stood.

“I called her last summer and I’m like, ‘So, you know that offer you’ve been offering? Is that offer still on the table?” Angel said.

Linda responded with a resounding, “yes.” Immediately, she got on the phone and started contacting local fertility clinics. Linda was denied by many of the clinics because of her age, but she kept trying. Finally, she found a clinic willing to implant her with a fertilized embryo, as long as she could pass a few tests.

Linda passed the tests, and Angel’s egg, fertilized by Brian’s sperm, took the very first try. Interestingly enough, Linda said that Madden was probably her easiest pregnancy. She says she didn’t have any complications or morning sickness. And not having any little ones underfoot probably made a difference.

“I didn’t have any young children around – my youngest are in college – so that made it easier,” Linda said.

For Linda, serving as a surrogate to her daughter was pretty straightforward.

“I just saw it as babysitting for a few months,” she said. “It was their child all along. It was just a room for rent.”

And thankfully, the family has received a lot of support from friends, other family members, and members of the community.

“I had so many well wishes and encouragement, even strangers in the community,” Linda said. She added that it’s not all that uncommon for a grandmother to serve as a surrogate, adding that she’d read an article once about a 60-year-old woman doing it. And the clinic the family used had had similar arrangements in the past, according to Linda, so the staff hadn’t treated it as an unusual case.

Finally, on August 13th, little Madden was born. Angel was able to accompany her mother into the delivery room and watch her 7lb, 14oz baby boy be born.

“It was awesome,” Angel said. “It was an awesome, awesome experience.”