The Vatican has called for worshippers to be less prudish about seeing the Virgin Mary breast-feeding Jesus. 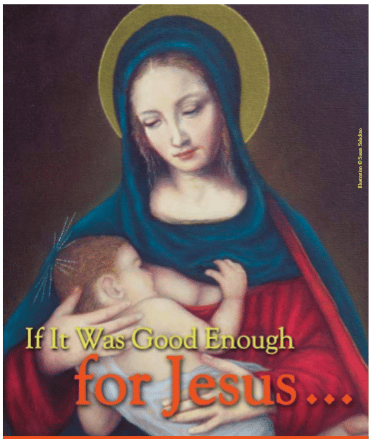 A vast number of paintings depicting the bare breasts of the Madonna have been “censored by the modern age” because they were too “unseemly”, according to L’Osservatore Romano, the official newspaper of the Holy See.

Lucetta Scaraffia, a church historian, has called for the image of Mary as an human, tender and loving mother to be rehabilitated. She said: “Jesus was a baby like all others. His divinity does not exclude his humanity”.

Since the 17th century, artists have been covering up Mary because of criticism about the “carnality and unbecoming nature of many sacred images”.

I like that they have come out and taken a stand on this issue, especially when breast feeding in certain settings in 2008 still makes people uncomfortable.
Related Articles: