The newborn baby of Bao Xishun, a 7 feet 9 inch herdsman, listed by the Guinness World Records as the tallest living man, is seen at a hospital in Zunhua, Hebei province October 2, 2008. 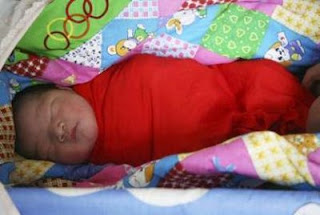 The world’s tallest man, China’s Bao Xishun, became the world’s tallest father this week with the birth of his first child, a boy whose initial height seems a compromise between his gigantic dad and average-sized mom.