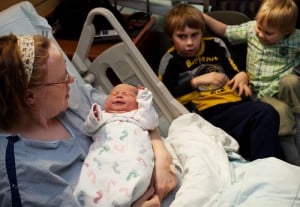 Children born on a leap year celebrate their birthdays once in four years, but one family in Utah will be celebrating all their children’s birthday on the 29th Feb of each leap year after mom Louise gave birth to her third consecutive child on the special day!

But this time around the couple stretched their chances a bit as Louise was already five days overdue with Jade.

“I have never gone over so I wasn’t sure if she was going to wait,” Louise said. “As soon as we passed midnight I knew it really, really could happen.”

According to the Guinness World Records the only other family that holds such a unique birth record is the Henriksen family of Norway which had triple leap day births in 1960, 1964 and 1968.

Leap day, the 29th February, comes every four years and is done to adjust the calendar and account for the 365 days and the additional 6 hours Earth takes to revolve around the sun.

People who do celebrate their birthdays on this special day are called “Leaplings’ and are known to joke about it saying they age four times slower than others. But it can also feel frustrating having to celebrate birthdays only once every four years and trying to celebrate on 28th February or 1st March on non-leap years.

But Louise says they have a large celebration in the end of February or beginning of March each year to mark the special birthday. They also make sure that the celebrations are extra special on the leap years.

“We always make sure to celebrate their fourth and eighth birthdays in a big way,” Louise said. “It is a milestone for everyone.”

The mom also jokes,”We’re gonna try to get our oldest a car on his fourth birthday.”

The couple also have two other children who were not born on leap day.

For the family, however, Xavier’s arrival was a surprise, they were a bit more intentional with Remington and Jade.

Reveals David, “I approached her in October of 2010 and said ‘If we are going to have another baby this would be really cool,’ I wanted to give her time to think about it.”

Louise did get pregnant but the doctors set the due date to be February 24th. They kept their fingers crossed as the due date passed and the next day until it was the leap day.

Louise was induced and she delivered her third consecutive leap day baby at 7.16 am. Baby Jade was a healthy 8-pound, 13-ounce girl.

“We did go over by five days, which was not easy, but it’s all worth it,” Louise said.

With the family already having levelled the record, are there any plans for Leapling number 4? To this Dad David replies,

“Right now the answer is obviously going to be no, but you can’t be sure. You never know if in four years we will be talking about it again.”

If they do talk about it again, be sure to watch this space in four years time!