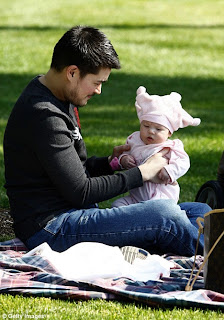 The controversial “pregnant man” Thomas Beatie has revealed to Barbara Walters that he is expecting again.

Barbara announced the news on The View this morning while promoting her new special, What Is a Man, What Is a Woman? Journey of a Pregnant Man.

“I looked at him and I said, ‘Are you pregnant again? The baby will be born in June,” she confirmed, adding, “I’m speechless.”

Thomas, who is in his first trimester, tells Barbara that he did not resume taking testosterone after his daughter Susan’s birth so he could have another baby. Beatie’s wife, Nancy, is unable to have children because she had a hysterectomy.

I have never understood the whole hysteria about the ‘pregnant man’. He/she is not a man. He is a woman that had a partial sex change. Knowing that he may want to have a baby later on in life, he left his female reproductive organs in place so that a pregnancy could be possible and guess what – he got pregnant. Millions of women have done it all over the world…..

I guess the weird part is that he looks like a man.