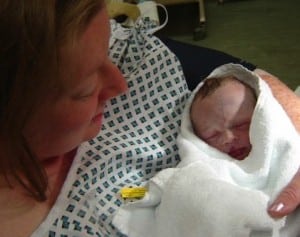 Most parents see their children as little miracles, and that’s exactly the way it should be. But for the parents of four-year-old Ethan Stewart, the word “miracle” doesn’t even begin to explain how they feel about having him in their life today. Born with – not one, not two, but THREE deadly conditions that threaten his life daily, his parents realize just how precious each and every day with their child really is.

“Sometimes at night, you think ‘what if?’ It’s always at the back of your mind that something awful could happen, but you can’t allow yourself to live in fear,” Ethan’s mother, Erica, told Daily Mail UK. “You’ve got to enjoy one day at a time and not let it steal your life.”

Erica and her husband, Philip, first learned of the conditions plaguing their son shortly after his birth at Aberdeen Maternity Hospital. The umbilical cord had been wrapped around his neck during delivery and Ethan needed to be resuscitated. But there was more. There were bluish marks across his face. At first, doctors assumed the marks were just bruises from the forceps used to help delivery him, but further testing would indicate something much more dangerous, and scary.

MRI scans indicated that Ethan’s brain had developed abnormally. His unique diagnosis included Sturge-Weber malformation (a condition that causes epilepsy and increases the risk of stroke), widespread intercranial haemangioma (a rolling ball of blood vessels in his skull and an abnormal collection of blood vessels under his skin that cause the blue marks on his face and forehead), and cortical dysphasia (an abnormality in the brain’s development that causes electrical misfires in the brain, which triggers seizures).

“The wind dropped out of our world. It seemed so unreal,” Erica told Daily Mail UK. “His MRI scan just looked like a mishmash of blood vessels. The neurologist calls him a walking miracle because he can’t believe the way he is now and the way his brain scan was.”

But the miracle of having Ethan in their life every day is always overshadowed by the daily care of their son and his conditions. He’s suffered from thousands of seizures since his birth, which vary in intensity, appearance and length. They occur day and night. They can last for seconds or for several minutes. They are a constant in the life of Ethan and his parents.

“Ethan’s had thousands of seizures,” Erica said. “I try to keep a diary of them. In the last month, he has had about 100, but he’s probably had more than that because sometimes, they’re so quick, I can’t catch them all. The slightest thing can trigger it – excitement, boredom, exhaustion. He gets excited when his friends come over or when someone arrives at the door and the bell rings. It’s very difficult, but his condition is just part of life now.”

The seizures are such a constant threat, in fact, that Ethan is never left unattended. And, most likely, he’s mostly watched by his parents since his seizures don’t always look like what people think they should. Sometimes he looks like he’s daydreaming. Other times, he looks like he’s misbehaving. And then there are the tonic-clonic seizures that threaten his life.

“There is a misconception about epilepsy that you lie down and have a fit,” Erica said. “But Ethan’s are all quite different. Some of the seizures can just look like naughty behavior, but his eyes will be away in the back of his head and if I click my fingers in front of his face, he won’t respond. With complex partial seizures, he starts mumbling incoherently and runs about all over the place. It looks like he is awake, but he’s not. I’ve got to monitor him in the bath and watch he doesn’t climb up high. There was one time when we went swimming, Ethan became excited and had seizure after seizure. If I hadn’t had a hold of him, he would have been under the water. If he’s not conscious, the worst thing is trying to restrain him. You just have to make sure he’s safe and that he doesn’t bump into things or run out into the road.”

Sometimes, Ethan can warn his mother when a seizure is about to happen. He’ll experience a strange smell, known as an aura, or his face will turn red. But so many of them are so sudden that there’s no warming, and when he was little, some of the seizures were so brief that it wasn’t obvious that he was actually having one. Sadly, all those seizures take a big toll on little Ethan. But even with all the effects, this little guy proves to be stronger than his condition; Erica says his favorite activities include going to the nursery and kicking a soccer ball out in the garden.

“Ethan does get frustrated sometimes because he is tired a lot of the time,” Erica said. “Fitting exhausts him. But he just takes it all in his stride.”

Until September of last year, Ethan hadn’t been diagnosed with focal epilepsy, a condition where the excessive electrical activity that causes the seizure is concentrated on one part of the brain. Now, Ethan’s doctors have placed him on anti-convulsion medication that may help control the number of seizures he has. 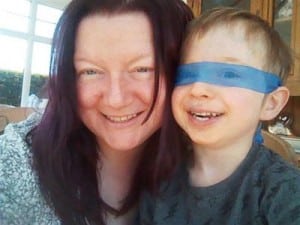 “He is very bright. [The doctors] didn’t think he would do very much and would struggle with everything,” she said. “But from the moment he was born, I have been praying for that child. I feel so blessed to have him in my life. He is such a character and he is so strong and very confident in himself. He really is the sort of person who just gets on with it. We are so proud of him.”

To try and raise awareness for Epilepsy Scotland, an organization that has helped her cope with Ethan’s condition, Erica dyed her hair purple. So far, she’s raised more than £1,200 for the charity.