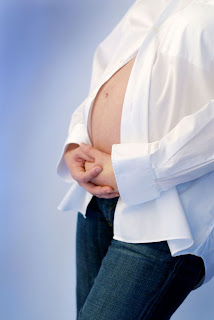 Staying healthy while your expecting a challenge for some expectant moms because there are so many ‘rules’ where food is concerned during pregnancy.

I came across this great article at Havasunews that tries to explain to moms what is true and what is false.

1. Myth Number One: I’m eating for two, so please pass the gravy.

You need to use nutritional common sense throughout your pregnancy,” says Elizabeth Somer, M.A., R.D., and author of “Nutrition for a Healthy Pregnancy.”

“Although it takes 55,000 extra calories to make a healthy baby, that amounts to just 300 extra calories per day in the last two trimesters. You can easily meet the requirement by eating a couple of healthy snacks throughout the day.”

Interesting fact: Suggested weight gain during pregnancy for a person of normal weight is 25-to-35 pounds. A woman who is considered underweight should put on 28-to-40 pounds, and an overweight person should put on 15-to-25 pounds.

When you are pregnant, many favorite and everyday foods suddenly become off limits – for example, unpasteurized cheeses, caffeinated beverages and deli meats. Many pregnant women think sushi is off limits too, since certain types of fish may contain toxins and pollutants that can be harmful to both mother and baby.

The good new is that moms can there is this great product called Fujisan Sushi. It is the only sushi enriched with life’s DHA — a vegetarian and sustainable source of the omega-3 DHA derived from microalgae, with less risk of contamination. Fujisan Sushi provides 32 mg of this important nutrient per serving and is considered an excellent source of DHA, the primary building block for your baby’s brain, eye and cardiovascular health throughout life.

3. Myth Number Three: Nausea is a given, no matter what I eat.

While it may be common in pregnancy, there are ways to combat nausea. Most of us have heard of tried-and-true remedies such as munching on soda crackers. A limited number of human studies also suggest that one gram daily of ginger may be safe and effective for pregnancy-related nausea and vomiting when used for short periods, according to a report by the University of Maryland Medical Center.

*Ginger is a common cooking spice and can be found in foods such as ginger bread and ginger snaps. However, ginger may alter the effects of some prescription and non-prescription medicines, so check with your health care provider first.*