German doctors have revealed photographs of the smallest premature baby boy to have survived against incredible odds after being born at 25 weeks weighing just over half a pound.

The baby, only known as “Tom Thumb” weighed a fraction over 9.7 ounces (275 grams) when he was born by Caesarean section 15 weeks prematurely at the University of Medicine at Göttingen in western Germany in June 2009. 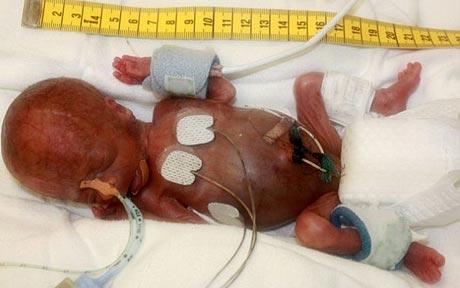 Like most babies born at this gestation, he need 24 hours monitoring and was hooked up to feeding tubes, breathing tubes, a heart monitor, a catheter and a plethora of electronic devices to monitor every vital sign as he faced risks of cerebral hemorrhage or organ failure.

In December, the baby was finally pronounced “stable” after achieving a weight of 8.2lbs – considered an average birth weight in Germany.

Now, nine months after his birth, doctors have allowed the unnamed boy’s parents to take him home, after ruling that he is strong enough to survive outside of the hospital 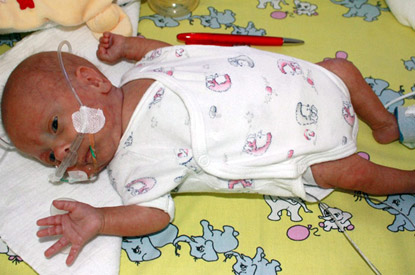 Even though officials from the hospital said that, they have checked all available records of premature births worldwide, they were unable to find a viable birth of a boy at a lower weight, we covered a tiny baby last year who weighing 259gms.

Before this, Medical professionals believed that survival can not be achieved at birth weights below 350 grams (0.77 pounds)