In the UK, infants born below one pound or before 23 weeks gestation are not considered “viable,” which just basically means that health care professionals will not provide care because of the risk of mortality and limited quality of life. Cutoffs like this are not uncommon. In fact, most countries have limitations like this in place. Unfortunately, the medical reasoning fails to make it any easier for grieving parents.

Kate and Renato Douse would have been grieving parents, had it not been for a pair of forgotten scissors. While their daughter, Maddelena, was born at exactly 23 weeks, making her a good candidate based on gestation, Maddelena wouldn’t have weighed enough to be considered viable. But as fate would have it, a pair of scissors got left on the scale. With the weight of Maddelena and the scissors combined, the very tiny preemie managed to hit the one pound cutoff on the nose. 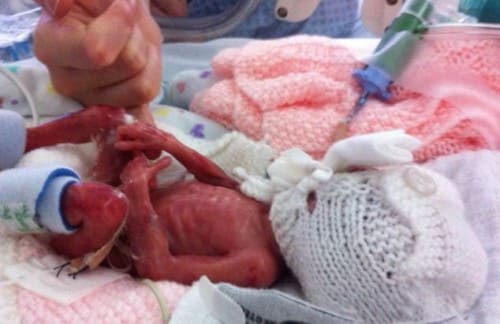 It wasn’t until after the Douse’s little miracle had been hooked up to life-saving ventilators that someone noticed the scissors sitting on the scale. It was in that moment that doctors learned that Maddelena had actually only weighted 382g. But they were already administering care, and amazingly enough, that care saved the tiny preemie’s life.

Now six months old, 5½ pound Maddelena has been discharged from the Royal Sussex Hospital and is expected to grow into a healthy little girl.

But Maddalena is more than just a tiny preemie survivor; she’s also a surviving twin. Just a few weeks after Maddalena and her twin, Isabella, were born, Isabella died. While no indication was given o whether or not Isabella had made the cutoff and received life-sustaining report, the Douses did say that they were still suffering with the heartache from the loss of their other daughter. But they are grateful to have little Maddalena home just in time for Christmas.

“We never thought we’d ever bring Maddalena home,” Maddalena’s mother, Kate, told Daily Mail. “She now weighs 5½ pounds and is getting stronger by the day. She’s our little miracle and we’re so glad to have her home in time for Christmas.”