Home » Tiny Tots Walk More than Two and a Half Miles a Day, Putting Many Adults to Shame 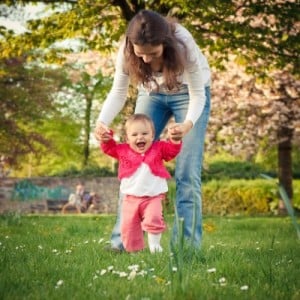 If you’ve ever parented a toddler, you’d probably guess that your tot takes a lot of steps every day, but have you ever thought about how many steps? US researchers from New York did and they videoed more than 130 infants between 12 and 19 months old as they explored a specially-designed playroom and another 15 while playing at home to find the answer to their question. What they learned is enough to put most adults to shame!

Children included in the study ranged from ‘expert crawler’ to those that had been walking for months. After conducting a frame-by-frame analysis of the videos, researcher determined that toddlers who walked clocked an average of 2,368 steps an hour. In those steps, they covered approximately 0.44 miles. For the average toddler who is active half of their waking time, that comes out to 2.6 miles of walking per day!

Not quite as surprising as the sheer number of steps the tots took is the number of falls they experienced. On average, toddlers fell 17 times an hour. New walkers took the most falls and one tiny tot racked up a total of 69 falls in one hour.

Because the data was similar for children recorded at home, the figures can’t be explained away by excitement over a new toy or being in a new place. But there was one more question that needed to be answered: why do babies start to walk when they can already get around on all fours? Researchers believe the answer can be found in the fact that toddlers fell more often, but they were also able to move further faster. In other words, they really didn’t fall any more often, on average, than crawlers.

“Over days of walking [toddlers] take more steps, travel further distances and fall less,” Professor Karen Adolph, a psychologist specializing in infant learning told Daily Mail. “They may be motivated to walk in the first place because walking takes them further faster than crawling without increasing the risk of falling. Assessments indicate that new walker reap all the benefits of an upright posture without incurring an additional risk of falling. Thus, part of the answer to ‘why walk?’ is ‘why not?’”

Adolph also said that, while the number of steps a toddler takes a day seems insanely high, estimates for other new skills are ‘equally enormous’ among tots.

“Middle-class infants hear 2,150 words per hour, more than 30 million words by three years,” Adolph said in the journal Psychological Science. “By two months of age, infants have executed more than 2.5 million eye movements and by three and a half months, they have performed 3 to 6 million.”

These extreme numbers are compared to the practice athletes and musicians must exercise to hone their skills. You know the old saying, “Practice makes perfect…”

“The consensus in the literature on expertise is that large amounts of regular practice, accumulated over years of training, promote expert performance,” Adolph said. “The same principle could apply to acquiring expertise in walking.”