Most parents want to feed their children healthy and wholesome food, and we’ll try almost anything to make that happen. We offer new foods, try out new dishes, search for new recipes, and even scroll through Pinterest for ideas that make healthy food seem more fun and exciting. Sadly, such strategies rarely work on picky eaters.

I’ve had five children, and up until that last one, I thought I’d be one of those “lucky” parents. Sure, each of my children had foods that they didn’t like – and one of them has a serious aversion to all things green – but I wouldn’t have considered any of my kids “picky eaters.”

Until I had my last child.

He thrust me into this strange, new world – one in which my child hated pretty much everything I made. Mashed potatoes. Chicken. Vegetables of any variety. Most fruits. Beans. Tofu. Eggs. Oatmeal. Yep . . . that’s right, my kid used to hate oatmeal.

You noticed I used that in the past tense, though, didn’t you? There’s a reason for that.

See, while my picky eater remains just that – a mini food snob who turns his nose up at anything not cooked on a pizza crust – his palate has expanded dramatically over the last few years. He eats raw carrots and broccoli, and though he still doesn’t love oatmeal, he’ll eat it (but only with cinnamon, honey, and apples). He absolutely loves fish – not from a box, but real, honest-to-goodness baked fish with just a little bit of seasoning. And he’ll even eat his version of “salad.”

How did we do it?

We were sneaky, conniving, and creative food sleuths – and now you can be, too, with these tried and true strategies for dealing with picky eaters. 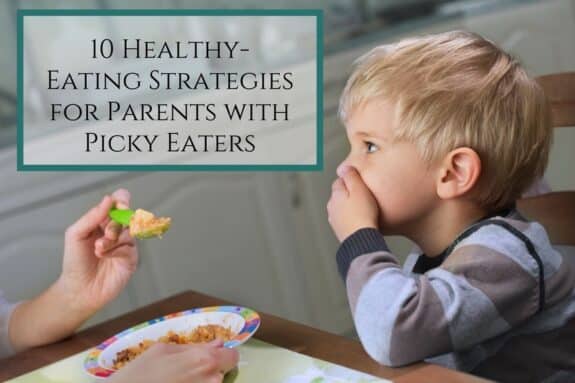 Perhaps one of the biggest mistakes that a picky-eater parent can make is to stop offering new foods. I get why we do it; there doesn’t seem to be a point to it when your child turns their nose up at everything you put in front of them, but some of our best discoveries came from trying new foods. For example, my picky eater was sure that he hated fish. Knowing he’d tried the fish portions they serve him at school, I could have just left it at that. Instead, I made homemade salmon with orange zest, olive oil, and seasoning. Now it’s one of his favorite meals.

Why give them foods that they hate? Because, truth be told, sometimes kids need to try it again, or they need to try it in a different way. New foods can sometimes taste, smell, or look strange, but after repeated attempts, picky eaters sometimes grow used to these foods. They may not ever love them . . . but that’s not necessarily the goal. The goal is to arm our children with an understanding of what healthy food looks, smells, and tastes like, that way they can make informed food choices as adults.

3. Let Them Help with Meal Prep

All my kids know how to cook something – even the younger ones. The reason? Because cooking can be both fun and empowering, especially for picky eaters. It can also be a way to coax your child into trying something they might not otherwise eat. Let them snack on olives before you add them to the dish. Ask them to try a tiny sliver of a raw bell pepper. Ask them to taste test the soup. You might be surprised what they’re willing to try when they’re the chef!

I remember my parents forcing me to eat everything on my plate . . . even if I hated it. I’m not that way, but I do require that my kids try at least one bite of everything before they toss their plates. I mostly use this strategy with new foods since my picky eater will say he hates food before he’s even tried it, but we also use it with foods he’s already tried. If he balks at me, I remind him that it’s just one tiny bite. After that, he can stop. It hasn’t given him a new-found love for foods he hates, but it has encouraged him to try new things that he might have otherwise refused. He’s also grown a better tolerance to some of his most hated foods.

For us, the real magic happened when we started watching what our picky eater was snacking on throughout the day. We noticed a lot of Triscuits and cheese, peanut butter and jelly sandwiches, yogurt, and granola. Why was this important? First, it clued us into what he might like to eat during meals (cheese, peanut butter, celery, etc.). Second, it forced us to notice how much he was snacking, and that put our minds at ease (what picky eater parent doesn’t worry about nutrition?!). Third, it encouraged us to implement a snacking cut-off time so that he would be hungry enough for dinner. Lastly, it gave us a way to make the next strategy work.

6. Be Willing to Compromise

When we have a food that our picky eater doesn’t particularly like, but also doesn’t hate, we’ll make compromises. For example, we might ask him to eat three bites of his vegetables in exchange for a peanut butter and jelly sandwich. It ensures he gets at least some of the good stuff in before eating one of his favorite, more routine food items. It’s also how we’ve managed to get him to eat “salad.” Sure, it’s just plain lettuce, but it’s better than no salad at all.

7. Make the Blender Your Best Friend

No matter how many strategies you have up your sleeve, there are still going to be some foods you simply cannot get your child to eat. Depending on the severity of your picky eater’s habits, that could lead to nutritional deficiencies. We’ve worked to mitigate against this issue with a blender. When I make soups or anything with a sauce, I’ll blend up carrots, beans, mushrooms, sweet potatoes, spinach, kale – anything I can’t get him to eat on its own – and toss it in the pot. He might not know he’s eating all those wonderful, healthy foods, but that’s irrelevant. The point is that we’re getting more wholesome foods into his belly, whatever way we can.

Working with a picky eater requires a TON of patience and persistence. Most days, it feels like we’ll never win. There are sometimes tears – both on his end and on mine. But I never let it show. Why? Because eating is supposed to be an enjoyable experience. If I make it anything less than that, I risk squelching the little bit of adventurous eating we’ve managed to instill in him. We want food to be a positive thing, and that means not letting him see how frustrated I am after he’s turned his nose up at every meal I’ve made in the past week.

Lately, we’ve tried adding foods that our picky eater loves into dishes that he doesn’t like quite as much. We’ve tried adding diced tomatoes into our nacho base (beans and seasoning), we’ve added minuscule pieces of sweet potato to chili, and we’ve thrown diced zucchini into our spaghetti. So far, it’s been hit-and-miss, but those hits are totally worth it!

10. Allow Your Child Some Guilty Pleasures

We’re all concerned about sugar, salt, preservatives, and other hidden “baddies” in our food these days . . . but kids are kids. Ice cream, cake, cookies, chips, and other snack foods are at every turn. Friends bring them to school, they see them on television, and these foods are front-and-center, anytime you step into a grocery store or gas station. As worried as you might be about your child’s nutrition, try to remember that these foods are unlikely to cause any serious harm when given in moderation, so grab their favorite snack food every now and then and let them indulge . . . Just maybe give it to them after they’ve forced down a bite or two of their vegetables at dinner.

Do you have any strategies that work with your picky eater? We’d love to hear about them! Please share them down below in our comments section.