After weeks of tumbling ratings and a never ending barrage of tabloid stories, TLC announced today that they have decided to take the show in a different direction – minus Jon! 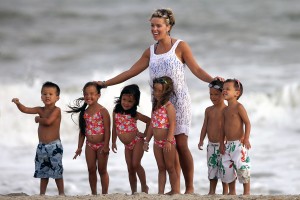 “Given the recent changes in the family dynamics, it only makes sense for us to refresh and recalibrate the program to keep pace with the family,” TLC president Eileen O’Neill said in a statement. “The family has evolved and we are attempting to evolve with it; we feel that Kate’s journey really resonates with our viewers.”

Also in the works is a project with Kate for 2010, possibly the talk show we’ve heard rumors of?

“Kate Plus Eight” will continue to focus on the eight Gosselin children — 5 year-old sextuplets and 8 year-old twins — but now “include a deeper focus on Kate’s role…and her journey as a single mother.”

Last week, only 1.7 million viewers tuned in to “Jon & Kate,” nearly 80 percent down from the season premiere.

“Kate Plus Eight” will premiere Nov. 22.