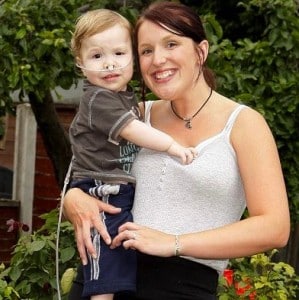 Kian Hill was born with a condition known as situs inversus totalis. It is a condition in which the internal organs develop on the wrong side of the body and it affects about one in 10,000 people in the UK. Generally,  those with this condition spend most of their lives in the hospital. But little Kian, fondly referred to as “mirror boy” by his family, has defied all odds.

Kian’s condition was not detected while in utero but his mother, Natalie Boughey, innately knew something was wrong. Her senses were confirmed when Kain was born. Natalie told reporters, “When he was born, the medical staff took him away for tests because he was struggling to breathe.”

Doctors performed multiple tests on little Kian and found that his heart was on the right-hand side of his body and was back-to-front. The heart was also in the place where his right lung should be. His kidneys were twisted in reverse. His pancreas and stomach are on the opposite sides of where they should be. His intestines are coiled in the wrong direction. He has no spleen and no appendix.

Kian only had a 50/50 chance at survival. Natalie and his father, Craig Hill, were told not to get their hopes up. The following months brought dozens of surgeries to help increase his chances of survival. The surgeries took place on almost a daily basis, from the moment that Kian was born. He even underwent a surgery that has been performed on less than 50 UK children – a procedure that would widen Kian’s windpipe.

A monthly bronchoscopy was also done to monitor the width of his airway and the functioning of his single lung. Kian has been under complete care of the hospital since the day of his birth. It seemed that Kian was doing well, considering his condition. But then, February of last year, the family faced their worst fear.

Kian was declared clinically dead. Stomach acid from had found its way his trachea and into his lungs. This caused his heart to stop. The family already had funeral plans in place, just in case the worst had happened and it seemed that their plans would be needed. But then, a miracle happened. Doctors were able to resuscitate him after 30 minutes.

Since that day, Kian has made serious improvements. So much so that he will soon be released to go home, just in time for his second birthday. His parents have built an extension to their home that will ensure that Kian still has all of the medical equipment he needs to survive. Kian will also have to have monthly check-ups at the hospital. However, his prognosis is now positive.

While no one really knows what the future holds for the amazing toddler, it seems that he has a chance at a normal life. He will be able to spend his days and nights at home, in his own bed, with his family. For that, many people, especially Kian and his family, rejoice.