If left unattended kids can get into a lot of trouble. One family learned this the hard way when a three-year-old nephew mistakenly crashed their Jeep into a neighbour’s house.

Police were called to a residence in Myrtle Creek Oregon on Thursday night following reports that a Jeep had crashed into the side of a house. 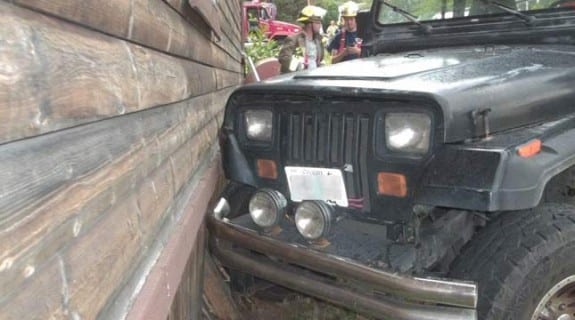 Earlier in the day officers had spotted a toddler in the same Jeep, and warned a member of the family that the little boy had keys to the vehicle and needed to be watched.

Just a half an a hour later they responded to a call on the same Jeep. Witnesses reported seeing the 4×4 traveling down the street, through an intersection, up over a curb, through a yard and into a house. They then noticed that a diaper clad toddler jumped out after the crash and ran home.

When officers arrived at the child’s home they said he was on the couch watching cartoons, “as if nothing had ever happened.”

The boy’s aunt and owner of the Jeep, Amy Mayberry, told KPTV.com that the whole thing was a big misunderstanding. She said the vehicle was parked on an incline and started to roll when the boy mistakenly knocked the shifter into neutral, which caused the vehicle to coast down the road and into a home.   The little boy got into the vehicle while she was in the bathroom and ended up on a scary joyride.

Thankfully no one was injured. Police said the family made a “civil compromise” with the homeowner regarding the damage to their house. Brennan Pennington, the boy’s caretaker, and relative was cited on the charge of failing to supervise a child.