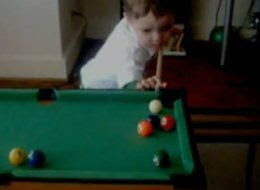 A New York toddler, who is still in diapers, has earned the reputation as a pool shark with a mean bank shot – even though he has to stand on a chair to reach the table.

He recently traveled to Las Vegas to put on a demonstration for the APA, the governing body of amateur pool.

Keith started playing pool on a child-size table, but has since moved up to a regulation table.

The O’Dells have no explanation for their son’s success, but say he learned by watching his dad shoot 200 racks every night.