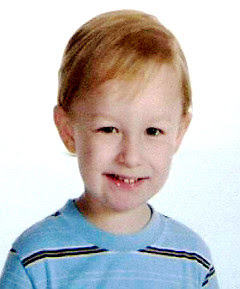 In the last week, 2 toddlers have been found after getting lost in the woods. Joshua Childers is the latest tough toddler to survive in the woods solo. The amazing part about this story is that this 3-year-old spent two days and nights barely clothed in the wet, chilly woods of Mark Twain National Forest.

He was found yesterday afternoon by a volunteer searcher lying on the ground of a hollow near a creek bottom.

When 57-year-old construction worker Donnie Halpin found the tot he wasn’t sure whether the grimy figure was even alive.

But Joshua sat right up and grinned at his rescuer.

By that point the lucky little boy was wet and only wearing a T-shirt and one tennis shoe. Halpin called 911, then wrapped the child in his shirt, scooped him up and carried him about a half-mile to a house.

Joshua had slipped out of his family’s mobile home around 11:30 a.m. Monday, while his father slept and his mother talked on the phone.

His grandmother, told KSDK-TV that Joshua told her he was on his way to visit her. She lives about five miles from his home, and he was found covered in ticks about a half-mile away. Somewhere along the way he lost his pull-up diaper and one of his sneakers, which searchers found near a pond Monday.

Adam Childers, Joshua’s dad told the media that it’s indescribable he and his wife were.

“I mean, you doubt if God’s actually with you for awhile, and then something like this happens, and you know he’s there.”

Doctors have told him that his son is a little dehydrated but otherwise fine. He was evaluated and listed in fair condition, first at Iron County Hospital and later at Jefferson Regional Medical Center in Crystal City, where he was transferred because it has a larger pediatric unit.