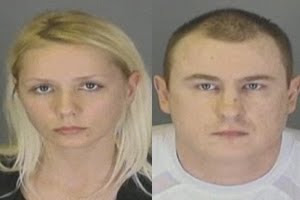 A Michigan toddler is in protective custody after he was found at home alone while his parents sat in jail.

Tatsiana Leichanka and Danius Vysniauskas were arrested while trying to open a bank account in another person’s name.

The couple used their one phone call to contact a friend, who immediately alerted police that they had left their toddler home alone inside their apartment to fend for himself.

When officers busted through the apartment door they found the child sleeping on a bed in the parents’ bedroom. His diaper was dirty and it appeared that he had tried to eat an apple which was sitting next to the bed.

The child was found 24 hours after his parents had been in jail, leading police to believe that he was left home alone the entire time.

An across the hall neighbor heard him cry but didn’t think anything of it until he saw several officers swarm the apartment.

The parents are expected to face charges ranging from identity theft to child neglect.

Let’s hope that this little guy has some grandparents who can take better care of him.